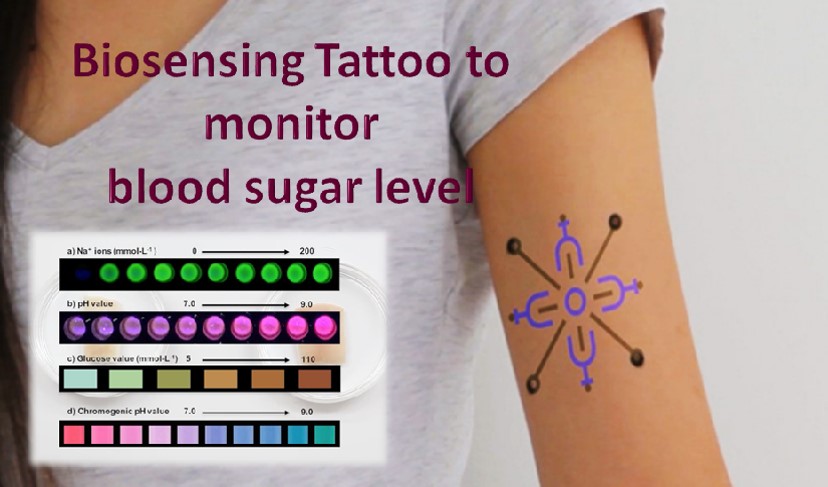 How cool it would be to get a tattoo that is patient friendly? Well, researchers at MIT and Harvard joined the two concepts to create tattoos that can change color based on blood glucose level of the person wearing them.

Diabetic people who must self-care and especially who are insulin dependent must monitor their blood glucose level. Many patients check sugar level with handheld meters that requires pricking finger to draw blood testing.  This test can be inconvenient and painful. Moreover, the tools required for testing can be expensive. Researchers are working on new ways to track sugar levels that does not involve pricking finger or needle to the body in any way.

Earlier in July, researchers at MIT announced the development of “Dermal Abyss”, (or d-abyss) a bio- sensing tattoo that changes color based on the levels of diabetic patients’ interstitial fluid.

A very thin, flexible, disposable device that sticks to skin like a rub-on tattoo has been developed by these researchers. This device holds small, tiny electrical sensors that can measure blood glucose in the fluid just beneath the skin. Instead of using regular ink, the Dermal Abyss’s biosensors can reflect the amount of glucose, alkali and sodium in the body.

The diabetic friendly tattoo will not show up in pharmacy any soon. Per Katia Vega, a post-doctoral associate at MIT and member of research team “the Dermal Abyss is a proof-of-concept that illustrates the potential of culturally and medically integrated biosensors”. They are biosensor tattoos that visibly react to changes in the metabolism. The purpose of the work is to light the imagination of biotechnologists and stimulate public support for such efforts”.

The technology is still in a very early stage of development and the study was designed to show that the concept is good. To sense glucose levels in actual numbers and continuously and to display in user friendly ways – work is going on. Using a liquid with biosensors instead of traditional ink, researchers want to turn the human skin surface into an interactive display. So far, the team has developed three different inks that shift color in response to glucose level change in interstitial fluid. Interstitial fluid sloshes around between our cells and compromises about 16% of the human body weight. When the blood sugar level rises, the sensor changes its color from blue to brown.

Even though the study is preliminary – the investigation indicates that the tattoo based iontophoresis-sensor platform holds considerable promise for diabetes management and can be extended toward noninvasive monitoring of glucose level. Not only the glucose levels, tattoos sense changes can monitor pH, which indicates dehydration and changes in sodium ion, which can give indications of hypertension. The ink that shifts from pink to purple in relation to pH levels, a vibrant green hue under UV light to show rising salt levels and the third ink blue to brown color change shows increase in blood sugar level.

Device is tested on few people and need to be tested on more people to prove that they are safe and accurate before they are approved for general use.