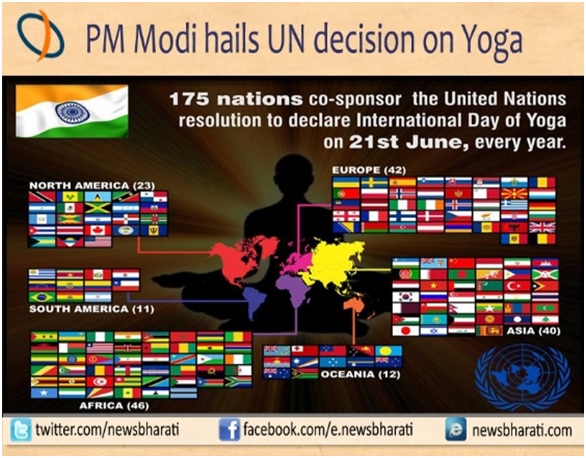 Derived from the Sanskrit word yuj, Yoga means union of the individual consciousness or soul with the Universal Consciousness or Spirit. Yoga is a 5000 year old Indian body of knowledge. Though many think of yoga only as a physical exercise where people twist, turn, stretch, and breathe in the most complex ways, these are actually only the most superficial aspect of this profound science of unfolding the infinite potentials of the human mind and soul.

The science of Yoga imbibe itself the complete essence of the Way of Life, including – Gyan Yoga or philosophy, Bhakti Yoga or path of devotional bliss, Karma Yoga or path of blissful action, and Raja Yoga or path of mind control. Raja Yoga is further divided into eight parts. At the heart of the Raja Yoga system, balancing and unifying these various approaches, is the practice of Yoga Asana.” (http://www.artofliving.org/in-en/yoga)

Yama: The firm control of the senses, they regard as Yoga. At that time one gets careful, for, Yoga is acquired and lost.

And the Svetasvatara Upanishad, 600 – 500 BCE, explains the results or outcomes for one who is steeped in the practice of yoga:

2.12. When the five fold qualities of yoga consisting of the earth, water, fire, air and ether are firmly established in the body, then in that body strengthened by the fire of yoga, there is no place for sickness, old age and death.

2.13 Lightness of being, health, steadiness, improvement in the complexion of the body, perfection in the voice, sweetness of the body odor, slight excretions are said to be the first results of the progress of yoga.

2.14 Just as a mirror shines brightly after it has been cleaned, so does the yogi who has realized the true nature of his soul becomes integrated as one in his body, attains sense of fulfillment and remains free from sorrow.

2.15 Through the real nature of his own soul, as if by a lamp held on the nature of Brahman, when he sees, his own real nature as one who is unborn and completely pure, He is freed from all the fetters at once.

There are as many postures as there are living creatures; and Maheśvara (the great Lord) knows their distinguishing features. Siḍḍha, bhaḍra, simha and paḍma are the four (chief) postures.

Today, the most commonly referenced text on yoga is Patanjali’s Yoga Sutras, dating between 200 BCE – 200 CE, which lays out the definition of yoga in the second sutra:

Yoga is the stilling of the fluctuations of the mind

While Patanjali codified the many existing teachings on yoga at his time, some of which are seen in Buddhism and Jainism, it cannot be ignored that yoga and references to its practice existed within Hindu scripture long before the Yoga Sutras (VHP, USA).

Legendary guru B.K.S. Iyengar confirms this in his book, Light on Yoga, where he says that yoga positions “are also called after gods of the Hindu pantheon and some recall the Avataras, or incarnation of Divine Power.”

Marichasana : Twist pose of Lord Shiva The Yoga Lord: Sit on the floor and stretch the legs forward.   Bend the left knee and heel should touch the back of the thigh.  It should be perpendicular to the ground.  Move the shoulder and stretch the arms back and hold the hands.  Turn slowly to the left and take a few breaths.

Parivratta Natarajasana: Lord shiva’s tandavanritya is Natarajasana : This is a balance asana that strengthens the legs. It also is a full body stretch, which engages the shoulders, chest and abdomen, strengthens the thigh and calf muscles, knees and ankles, hips and spine, and develops concentration and grace.

Lord Shiva in Dhyana mudra : The Dhyāna mudrā (“meditation mudra”) is the gesture of meditation and the concentration of the good. The two hands are placed on the lap, right hand on left with fingers fully stretched (four fingers resting on each other and the thumbs facing upwards towards one another diagonally), palms facing upwards; in this manner, the hands and fingers form the shape of a triangle, which is symbolic of the spiritual fire or the Triratna (the three jewels)

Vrikshasana of Lord Shiva & Parvathi: The asana is pronounced as VRIK-shAH-sana

This posture replicates the graceful, steady stance of a tree. Unlike most yoga poses, the Tree Pose requires keeping our eyes open in order to maintain body balance.

Chin mudra  of Lord Shiva: Form a circle by joining your thumb and your forefinger, Place the nail of your index finger against the soft pad of the thumb, Extend the last three fingers of your hands, the palm-side facing upwards, It is important that the palm-side of your hands should face upwards in the receiving pose. If the palm-side faces downward, the gesture becomes the jnana mudra. When you are meditating, form the Chin Mudra and place your hands on your knees to stimulate the “Nadi”.

Half lotus tree pose of Lord Dakshinamurthy : Here Lord Shiva is exhibiting vyakhyanamudra in left hand and Gnyana mudra in right hand both representing knowledge and removing evil through knowledge. In this pose one has to concentrate the mind and breathe while slowly inhaling and exhaling.

Vasishthasana Side plank pose of sage Vashishta and Vishwamitrasana of King Koushik (Vishwamitra) : It’s not difficult to see the connection between the poses Vasisthasana and Vishvamitrasana and the attributes of the legendary sages—one a priest, the other a king—for whom the asanas are named. Both poses are advanced arm balance poses.

Hanumanasana 1: Lord Hanuman crossing the Ocean : The yogi pushes one leg forward and one leg backwards until they are in the splits position. Once the yogi has moved the legs into position, there are several variations of arm and upper body position. One arm is stretched front, one leg bent.

Hanumanasana 2: Lord Hanuman takes a giant leap to cross the ocean while praying Lord Rama: The yogi pushes one leg forward and one leg backwards until they are in the splits position. Once the yogi has moved the legs into position, there are several variations of arm and upper body position including Añjali Mudrā.

Anjali Mudra of Lord Hanuman: Añjali Mudrā or praṇāmāsanais a hand gesture which is practiced throughout Asia and beyond. It is used as a sign of respect and a greeting in India and Sri Lanka and amongst yoga practitioners and adherents of similar traditions. The gesture is incorporated into many yoga asanas. At the end of Yoga class one will say Namaste while performing Anjali mudra.

Ashtavakrasana: In most cultures, any evidence of a son’s arrogance can get the son into deep trouble with his father. What makes Astavakra remarkable is that he crossed the line with his father, and was punished, before he even left the womb. While still in his mother’s belly, he corrected his father’s recitation of verses from the Rig Veda, a collection of India’s oldest and most sacred hymns. Enraged, Astavakra’s father cursed him, and the boy was born deformed. Astavakra’s name refers to the eight (asta) crooked (vakra) angles of his limbs; the many angles of the pose Astavakrasana evoke the curse of crooked limbs that Astavakra triumphed over by dint of his persistence, piety, and intelligence.

Ananda balasana (Child pose) of Bala Krishna: Lie on your back. With an exhale, bend your knees into your belly. Inhale, grip the outsides of your feet with your hands (if you have difficulty holding the feet directly with your hands, hold onto a belt looped over each sole.) Open your knees slightly wider than your torso, then bring them up toward your armpits.

Kurmasana: Lord Vishnu’s one of the incarnation is used in this pose. Sit on the floor and stretch the legs forward.   Widen the legs about a foot and a half.   By bending the knees, insert both the arms and stretch them straight outside. Rest the shoulders on the floor and keep the palms on the ground.   Exhale slowly and bend the trunk so that the chin should touch the floor.  The legs, arms and back should be straight.   Stay in this position for about 30 to 40  seconds.  Inhale slowly, lift the head, release the hands and feet and then come back to the normal position.

Virabhadrasana Warrior 1 Pose is an asana commemorating the exploits of a mythical warrior. Stand straight with your legs wide apart by a distance of at least 3-4 feet. Turn your right foot out by 90 degrees and left foot in by about 15 degrees. Stretch your both hand on opposite directions with palm facing down, When we practice one of the three versions of Virabhadrasana, Vernon notes, we cultivate the mind of the warrior, who must go into battle unattached to the fruits of his actions—one who has 360-degree vision and can see all things. “You look to all sides in the poses, but you try to hold to your center and not be pulled every which way,” she says. “Virabhadrasana teaches us to go into the field of life and stay in the center of our being.” If you can imagine yourself as a fearless warrior sent on a divine mission, you just might find renewed strength and vigor in the poses as well as the courage and determination to face life’s challenging moments.