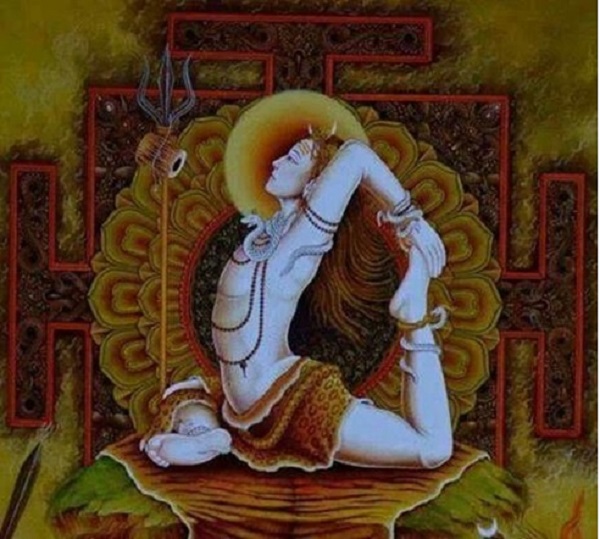 On Mahashivaratri day it is very auspicious to honor Lord Shiva the first yogi of Yoga culture. Derived from the Sanskrit word yuj, Yoga means union of the individual consciousness or soul with the Universal Consciousness or Spirit. Yoga is a 5000 year old Indian body of knowledge. Though many think of yoga only as a physical exercise where people twist, turn, stretch, and breathe in the most complex ways, these are actually only the most superficial aspect of this profound science of unfolding the infinite potentials of the human mind and soul. Mahashivratri is a festival that was chosen to honour Shiva, the Adi Guru, from whom yoga originated. On this night the planetary positions in the northern hemisphere are such that there is a natural upsurge of energies.

Hindu God Lord Shiva (Eshwara) is considered to be the Guru (teacher). In the yogic culture, Shiva is known as the first Guru or the Adi Guru. He is the Adi Yogi.. Out of his realisation, he became ecstatic and danced all over the mountains or sat absolutely still.. All the gods who saw him, saw something was happening to him that they themselves did not know.

Suddenly heaven felt like a bad place, because Shiva seems to be having lots of fun! They felt, “We are missing out on something.” When they finally got him to teach the method, Shiva expounded various types of yogas depending upon the level of preparedness of the person who was sitting in front of him.

The first part of Shiva’s teaching was to Parvati, his wife. In great detail, and in very gentle ways, Shiva expounded the ways of yoga to Devi. The yoga sutras of Shiva are such that almost in every sutra, he refers to her as the resplendent one, the gracious one, the beautiful one.

The second set of yogic teaching was expounded to the Sapta Rishis, or the first seven sages. For every being on the planet, there is a certain way that is the advantage of yoga. This teaching happened on the banks of Kanti Sarovar, near Kedarnath. This is when the world’s first yoga programme happened. There are as many postures as there are living creatures; and Maheśvara (the great Lord) knows their distinguishing features. Siḍḍha, bhaḍra, simha and paḍma are the four (chief) postures.

Legendary guru B.K.S. Iyengar confirms this in his book, Light on Yoga, where he says that yoga positions “are also called after gods of the Hindu pantheon and some recall the Avataras, or incarnation of Divine Power.”

Marichasana : Twist pose of Lord Shiva The Yoga Lord: Sit on the floor and stretch the legs forward.   Bend the left knee and heel should touch the back of the thigh.  It should be perpendicular to the ground.  Move the shoulder and stretch the arms back and hold the hands.  Turn slowly to the left and take a few breaths.

Parivratta Natarajasana: Lord shiva’s tandavanritya is Natarajasana : This is a balance asana that strengthens the legs. It also is a full body stretch, which engages the shoulders, chest and abdomen, strengthens the thigh and calf muscles, knees and ankles, hips and spine, and develops concentration and grace.

Lord Shiva in Dhyana mudra : The Dhyāna mudrā (“meditation mudra”) is the gesture of meditation and the concentration of the good. The two hands are placed on the lap, right hand on left with fingers fully stretched (four fingers resting on each other and the thumbs facing upwards towards one another diagonally), palms facing upwards; in this manner, the hands and fingers form the shape of a triangle, which is symbolic of the spiritual fire or the Triratna (the three jewels)

Vrikshasana of Lord Shiva & Parvathi: The asana is pronounced as VRIK-shAH-sana.This posture replicates the graceful, steady stance of a tree. Unlike most yoga poses, the Tree Pose requires keeping our eyes open in order to maintain body balance.

Chin mudra  of Lord Shiva: Form a circle by joining your thumb and your forefinger, Place the nail of your index finger against the soft pad of the thumb, Extend the last three fingers of your hands, the palm-side facing upwards, It is important that the palm-side of your hands should face upwards in the receiving pose. If the palm-side faces downward, the gesture becomes the jnana mudra. When you are meditating, form the Chin Mudra and place your hands on your knees to stimulate the “Nadi”.

Half lotus tree pose of Lord Dakshinamurthy : Here Lord Shiva is exhibiting vyakhyanamudra in left hand and Gnyana mudra in right hand both representing knowledge and removing evil through knowledge. In this pose one has to concentrate the mind and breathe while slowly inhaling and exhaling.

Virabhadrasana Warrior 1 Pose is an asana commemorating the exploits of a mythical warrior. Stand straight with your legs wide apart by a distance of at least 3-4 feet. Turn your right foot out by 90 degrees and left foot in by about 15 degrees. Stretch your both hand on opposite directions with palm facing down, When we practice one of the three versions of Virabhadrasana, Vernon notes, we cultivate the mind of the warrior, who must go into battle unattached to the fruits of his actions—one who has 360-degree vision and can see all things. “You look to all sides in the poses, but you try to hold to your center and not be pulled every which way,” she says. “Virabhadrasana teaches us to go into the field of life and stay in the center of our being.” If you can imagine yourself as a fearless warrior sent on a divine mission, you just might find renewed strength and vigor in the poses as well as the courage and determination to face life’s challenging moments.

2 Comments on “Lord Shiva And Yoga”