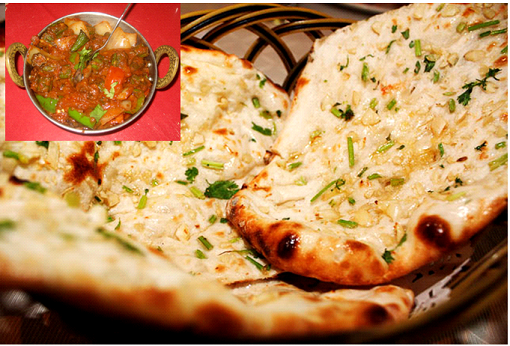 Naan is one of the most popular flat breads served with South Asian food. In particular, accompanying food from the Northern Area of India, Pakistan, Afghanistan, Bangladesh, Iran, Uzbekistan, Tajizkistan and surrounding areas. Originally from Middle Eastern countries, naan occupied hearts of Punjabis, India. The first recorded history of Naan can be found in the notes of the Indo-Persian poet Amir Kushrau in 1300 AD. Naan was originally cooked at the Imperial Court in Delhi as naan-e-tunuk (light bread) and naan-e-tanuri (cooked in a tandoor oven). During the Mughal era in India from around 1526, Naan accompanied by keema or kebab was a popular breakfast food of the royals. The word Naan is derived from the Persian word ‘non’ which refers to bread, and initially appeared in English Literature dating back to 1780 in a travelogue of William Tooke. In 1926, overlooking the hustle and bustle of Regent Street, Veeraswamy, Britain’s oldest Indian restaurant served Naan on its menu. A typical naan recipe involves mixing All purpose flour with salt, a yeast culture, and enough yogurt to make a smooth, elastic dough. The dough is kneaded for a few minutes, then set aside to rise for a few hours. Once risen, the dough is divided into balls, which are flattened and cooked.

The ‘World’s Biggest Naan Bread’ was made in 2004 by Honeytop Specialty Foods. The Naan measured exactly 10ft by 4ft and celebrated the launch of Brewers Fayre’s Curry Nights in the UK. It took over five hours to make and required eight staff to carry it! Varieties of Naan that are available are garlic, onion etc.