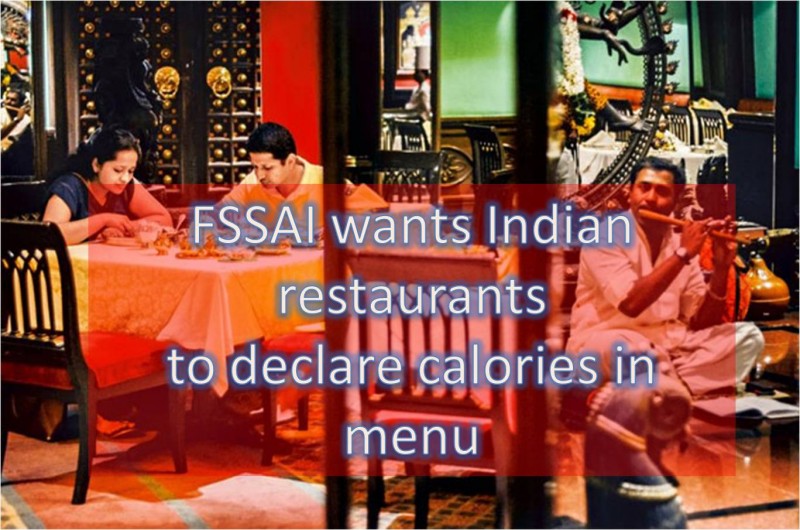 To promote nutrition and good health FSSAI, Food regulator of India, is considering adding calories from each item in Indian restaurants menu. In India few fine-dining restaurants, especially those at five-star hotels, have separate menus for low-calorie food and offer sugar-free options on demand. However, they do not declare calorific and nutrition details.

India’s food regulator wants restaurants to declare the calorific and nutritive value of the food they serve in an effort aimed at making consumers aware of what they eat.

However, Agarwal does not want to make this mandatory—at least, not yet. “To start with, let the big ones come forward and do this voluntarily.” “We have been discussing this idea with the stakeholders. In several countries, this practice is already applicable, and in some of these places, it is voluntarily. To enable restaurants that want to voluntarily list nutritional information on their menu cards, we may provide for a provision in the labeling regulations, which are being finalized.”

The US Food and Drug Administration (FDA) probably inspired the Indian food regulator’s move. FDA in December 2014 notified rules for Nutrition Labeling of Standard Menu Items in restaurants and similar retail food establishments. By 5 May 2017, some categories of restaurants in the US will have to comply with these. FSSAI is likely to follow the USFDA standards, when it decides to notify rules, although there is no plan to do this immediately.

“We are working with FSSAI and disclosing information on nutrition and calorie intake will not be an issue,” said a spokesperson for the Hotel and Restaurant Association of Northern India that has 1,700 members across nine states.

Riyaaz Amlani, president, National Restaurants Association of India (NRAI) is not as enthusiastic about the idea. Amlani, owns Impresario Entertainment and Hospitality Pvt. Ltd that runs popular restaurant and bar and cafe chains such as Smoke House Deli and Social. He says, “Making it voluntary may make sense. But if it is mandatory, compliance may be an issue. Declaration of nutrition information and calorie details will be a huge task. Even in the western countries, it is not a practice”

“In a bid to take forward FSSAI’s Serve Safe initiative, we will be running a pilot with about 200 members in major metros. We will work with chefs on a model to specify estimated number of calories and other nutritional information on dishes being served, on menu cards,” he said. Under the Serve Safe initiative, FSSAI has now made it mandatory for every restaurant to have at least one trained and certified food safety supervisor.

The food services market in India is projected to grow to Rs4.98 trillion by 2021, expanding at an annual average rate of 10%, from Rs3.09 trillion in 2016, according to a NRAI-Technopak report.