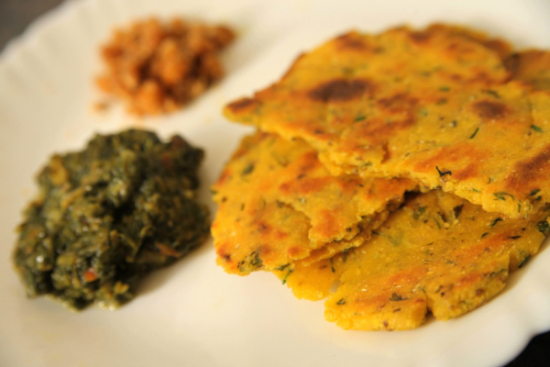 Bread of corn or Makki di roti, मक्की दी रोटी (Sanskrit) is a flat, unleavened Punjabi bread made from corn flour, primarily eaten in Punjab region of India and Pakistan. Like most rotis in South Asian cuisine, it is baked on a tava. It is an important element of the rural Punjabi cuisine. It is made from corn flour and cooked on griddle and topped with butter. Makki di roti is yellow in color when ready, and has much less adhesive strength — which makes it difficult to handle. Due to this, making makki di roti is more difficult than roti made from wheat flour. Makki di roti is generally made during winter in Punjab and is perhaps best known when accompanied with saag (especially sarson da saag i.e. cooked mustard green leaves), Similarly, in Uttar Pradesh, it is eaten with spinach and added butter. Typically, the flour is kneaded with cold water in India, but if made at home in an English kitchen, then hot water from a kettle is used. Makki di roti accompanied with butter and buttermilk is very popular combination in Punjab. Makki ki roti is generally made during the winter months in Punjab. Traditionally ladies make Makai ki roti by hand and roast over kanda (cow dung cakes) on chulha (open fire stove) that gives this roti a smoked flavor and serve with homemade butter. These days everybody use rolling pin to roll roti and cook on tava (griddle). Corn flour has less adhesive strength which makes it difficult to make roti than wheat flour. This is one of the reasons to mix wheat flour with corn flour to make roti.