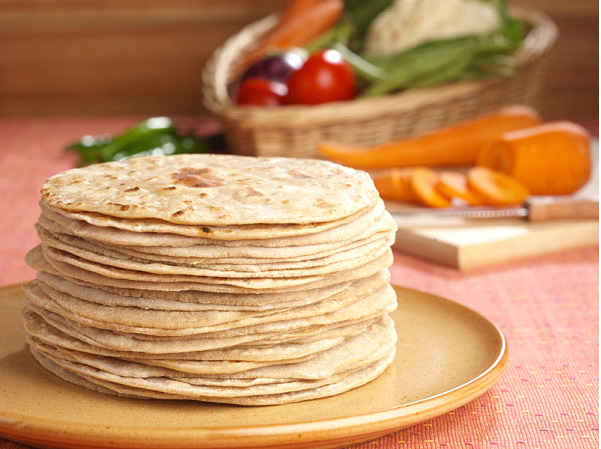 The word chapat (चपत) in Hindi means “to slap”, and the traditional method of forming rounds of thin dough is by slapping the dough between the wetted palms of the hands. With each slap, the round of dough is rotated. Ayurveda dates it back to the Vedic period – where purodhashas, from where the word pataha or parota eventually came, was usually stuffed with dry lentils or vegetables and offered as thick pancakes during yagnas and homas in Indian tradition – there is little mention of the humble chapati. Available literature on chapati is noted in Ain-i-Akbari, a 16th-century document by Mughal Emperor, Akbar’s vizier, Abu’l-Fazl ibn Mubarak as one of the Great Emperor’s favourite.

A dough is prepared with atta and water, kneaded with the knuckles of the hand made into a fist and left to prove for at least ten to fifteen minutes for the gluten in the dough to develop. After proving, the dough becomes softer and more pliable. Small portions of the dough are pinched off and formed into round balls that are pressed between the two palms to form discs which are then dipped into flour and rolled out on a circular rolling board (chakla) using a rolling pin (velan or belan) into a perfect circle. The belan is formed differently according to region. The rolled-out dough is then thrown on the preheated dry tava (griddle) and cooked on both sides.
An interesting story about popularity of chapathi is in our history. It dates back to 1574 when Bikrmi Shri Guru Nanak Dev ji reached Manikaran with his two disciples Bala and Mardana. After days of walking, Mardana began to starve, but with no source to cook meals he had abandoned the idea till Guru Nanak asked him to lift the stone and find hot water spring underneath. He then instructed his disciple to roll out chapatis in the spring. But to Mardana’s despair the chapatis drowned. And then a few minutes later they appeared on the surface, perfectly baked. Since then it is believed that anything you put in the Hot Spring will float. Many believe that this may have been the first puri as well.