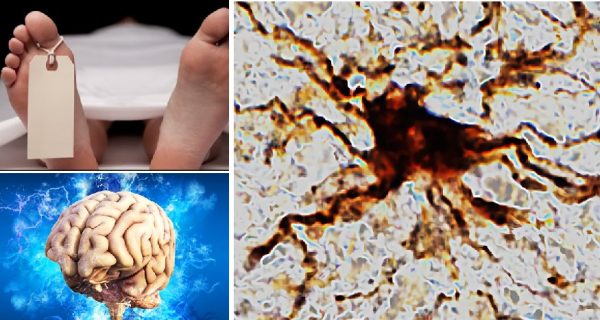 We think after our heart stops beating or dies, entire body system shuts down and there is no more growth and development occurs in human body. Is that true? Well, a new study conducted by group of scientists suggests that there is one type of cells that remain alive after we die. These cells will remain alive and show increased activity after hours of death. Sometime might show even massive growth!

An article published in the journal of Scientific Reports, scientists from University of Illinois Chicago analyzed gene expression in tissues collected from brain surgery at multiple times after removal to simulate post-mortem interval and death. Their findings are remarkable as the results show that some cells gene expression increased after death!

These zombie genes increased genetic expression after the postmortem interval. Specifically, one type of cells called glial cells or inflammatory cells showed this type of expression. Glial cells grow and sprout long arm like structure for many hours after human death! Glial cells are part of the nervous system, they do not transmit or receive electrical signal, but they support other brain cells, binding neurons and help them function.

According to Dr. Jeffrey Loeb, Head of Neurology and rehabilitation at the UIC college of medicine and corresponding author of the research paper “That glial cells enlarge after death isn’t too surprising given that they are inflammatory and their job is to clean things up after brain injuries like oxygen deprivation or stroke” Glial cells act as cleanup crew after illness and brain injuries.

During analysis it was observed that 80% of the genes analyzed remained stable for 24 hours. This included housekeeping genes, neuronal genes that are involved in memory, thinking and seizure activity and third group are zombie genes in Glial cells. Zombie genes increased their activity while the neuronal genes were degrading, and zombie genes activities peaked at about 12 hours!

Understanding the brain functions is critical for diseases like Huntington’s. In this study brain cell samples were collected from patients who were suffering from epilepsy and other conditions. The findings help to understand which genes and cell types are stable, which degrade, and which genes increase activity in postmortem brain cells helps to understand studies related to brain.

Zombie genes: ZOMBIE’ CELLS COME TO LIFE AFTER THE DEATH OF THE HUMAN BRAIN.