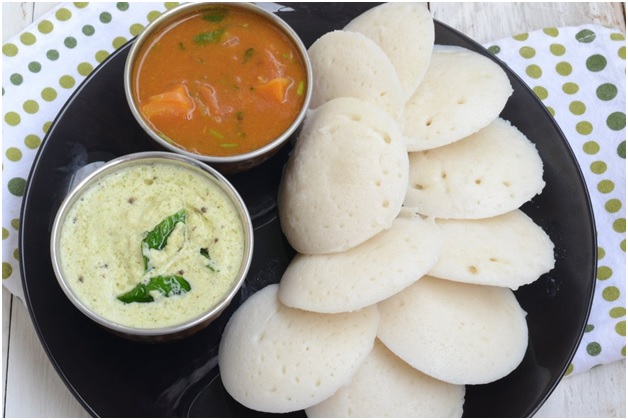 You all would have seen a video which shows “Idli as the most healthiest breakfast in the world”. Many of us are Idli lovers and it feels good!  What is the specialty of idli that makes it a preferred breakfast?

According to research on ‘India Breakfast Habits Study’ conducted by Dr. Malathi Sivaramakrishnan of Nirmala Niketan (with support of Kellogg India), the existence of well-defined breakfast foods like Idli and Dosa with Sambar ensures that Chennaiites have a breakfast adequate in calories compared to De­lhi, Mumbai and Kolkata.

Idli, a very popular fermented breakfast food consumed in the Indian subcontinent, consists mainly of rice and black gram. Idli fermentation was carried out in the conventional way in a batter having rice to black gram in the ratios of 2:1, 3:1 and 4:1 at room temperature. It makes an important contribution to the diet as a source of protein, calories and vitamins, especially B-complex vitamins, compared to the raw unfermented ingredients. It can be produced locally and used as a dietary supplement in developing countries to treat people suffering from protein calorie malnutrition and kwashiorkor (a form of malnutrition that occurs when there is not enough protein in the diet) Adding Saccharomyces cerevisiae along with natural bacterial flora of the ingredients, is commonly used to standardize Idli fermentation in terms of improved organoleptic characteristics, leavening and nutritional constituents. Traditional Idli fermentation involves several bacteria and yeasts, contributed by the ingredients rice ( Oryza sativa ) black gram (Phaseolus mungo) and the environment, with overall dominance of the former in bringing about various changes. Idli fermentation is accompanied by an increase in total acids, batter volume, soluble solids, reducing sugars, non-protein nitrogen, free amino acids, amylases, proteinases and water soluble vitamins B1, B2 and B12 contents, thus accounting for improved digestibility and nutritional value of the staples. (Future of Idlis: A scientific assessment by Elizabeth Yorke; under the guidance of Dr. Prabhakar Sastri, Manipal University),

What else Idli contains that makes it more healthy breakfast in India (& world)?

One idli contains 1 milligram of iron, and trace amounts of calcium, folate, potassium and vitamin A. The iron is mostly from the black lentils, with about 25 percent of it from the rice. Iron keeps your blood oxygenated and is crucial for any diet. Men need 8 milligrams daily and women 18 milligrams.

How to prepare Idli?

Traditionally, Idli preparation is as follows:

[1] Soak the rice and black gram separately or together for 6-8 hours.

[2] After draining the water, grinding rice and black gram with occasional water

[3] Coarse grind and add a little salt to the batter

After 15 to 20 minutes steaming have hot idlis with delicious saambar, fresh butter  and chutney !