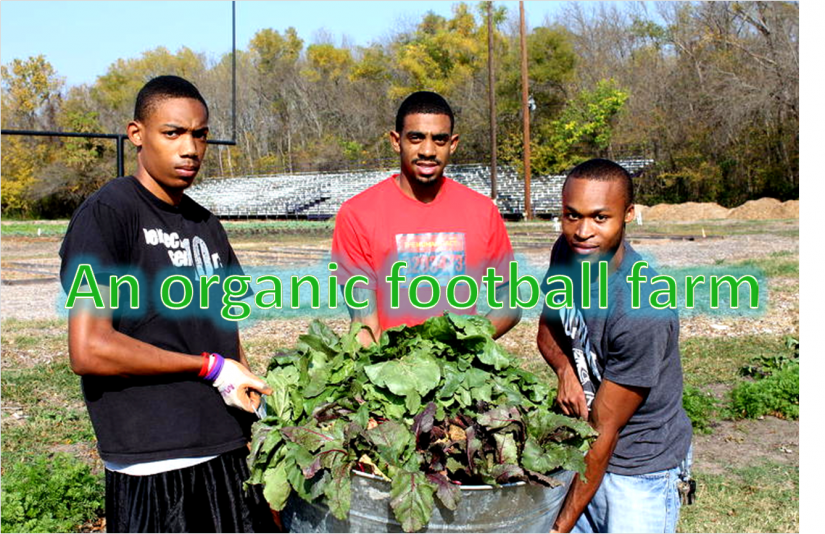 Organic farming is very promising and can bring good health to everyone. In Paul Quinn College, Texas organic farming in Foot ball field helped in many ways…Healthylife.

When President Michael J. Sorell took over at Paul Quinn College, a private, historically black college in Texas, the school was just barely getting by. Sorell knew he needed to make some serious changes if the college he now ran was going to succeed once again and continue to make a name for itself.

For him, that meant making some really tough choices. Since college football has such a strong fanbase in America, it was difficult for Sorell to make the decision to cut the entire team. What the college was left with was an empty sports field and lots of ideas about how to put it to use.

After three years of mulling over their options, Sorell collaborated with Trammell S. Crow, a local real estate agent who was also a philanthropist and looking to add a community garden to the area. The football field was the perfect locale, and what started out as a few raised beds with some small crops quickly turned into so much more.

President Sorell knew that the surrounding area of Dallas, Texas had little access to fresh food because of the lack of available land. When plans for a campus grocery store that would supply fresh food fell through, Sorell decided that their tiny garden needed to be their primary supply.

With the help of Crow and a sponsorship from PepsiCo’s Food For Good Initiative, the We Over Me Farm became a reality. Today, the organic farm boasts an annual yield of 30,000 pounds of food, 15-20 percent of which is donated to local food charities. The farm has also gotten the college back on the right track and it’s now listed as a local food producer.

The community is intensely involved in maintaining the farm now, and they often have programs that draw in more neighbours to join in.

“One weekend, we literally had three generations of one family all volunteering at the farm,” said Hannah Koski, who now runs the farm. “It was awesome.”

The farm is essentially split in who tends to it and who receives what produce, but it still brings the community together. While one section goes to local catering companies and restaurants, another is donated to churches and even another has a small flock of chickens whose eggs are used in a weekend meal program. Each part of the farm serves a purpose and nothing goes to waste.

While it has obviously made an impact in the local food supply, the farm has also less explicitly improved the community in other ways. Some individuals started working and volunteering for the farm part-time and have learned valuable skills to take with them through life.

One student worker, Chardae Plump, said, “Working here has also taught me a lot about what we eat. We eat a lot of fast food, not a lot of healthy choices here. Growing up, my mom loved vegetables, but I never knew how they grew or how to sustain a farm.”

The garden is seen as “much more than a farm” because of how it has affected everyone and changed the surrounding area. It has greatly impacted the individuals who run it and benefit from it, and Koski said,

“At the end of the day, the farm is about the students. Most are from under-served, disadvantaged communities, and I want to set them up for success as much as possible.”