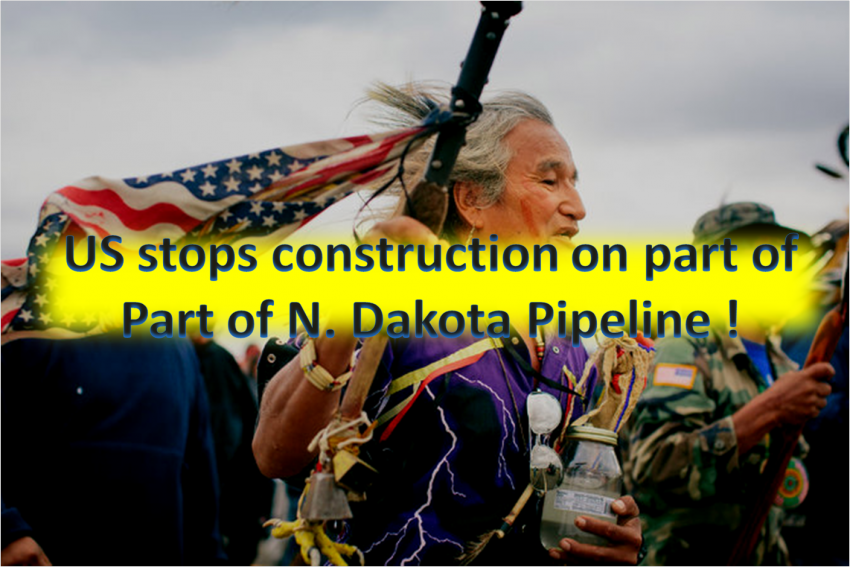 “Today the Army Corp of Engineers announced its decision not to grant the easement to the Dakota Access Pipeline crossing the Missouri immediately above the Standing Rock Sioux Reservation, and to study alternate routes.”

“I am thankful there were some leaders in the federal government that realized something was not right even though its legal. For the first time in history native American, they heard our voices. This is something that will go down in history and is a blessing for all indigenous people. I heard the army corp of engineers will not grant the easement and they will reroute. I would say that is it over.”

The decision essentially halts the construction on the 1,172-mile oil pipeline about half a mile south of the Standing Rock Sioux Reservation. The decision is also a victory for the thousands of demonstrators across the country that flocked to North Dakota in protest.

“Our prayers have been answered,” National Congress of American Indians President Brian Cladoosby said in a statement. “This isn’t over, but it is enormously good news. All tribal peoples have prayed from the beginning for a peaceful solution, and this puts us back on track.”

The DAPL will no longer be routed underneath a dammed section of the Missouri River that the Standing Rock Sioux tribe says sits near sacred burial ground. Concern for the pipeline’s development also includes the risk it could pose to the Indigenous peoples’ – and future generations’ – water supply.

However, as The Young Turks have been reporting over the past hour, even though this is a historic victory, we must all remain vigilant in continuing to oppose this pipeline entirely as well as promote wind and solar energies that are so needed at the moment.

Additionally, it must be remembered that Donald Trump has money in this pipeline working out and so the pressure must remain when he becomes President in late January.

This news comes on the day when over 2,000 military veterans have arrived at Standing Rock to help protect the water protectors. Included in the wave of veterans is Hawaii Democrat House Representative Tulsi Gabbard, who has long opposed the pipeline.