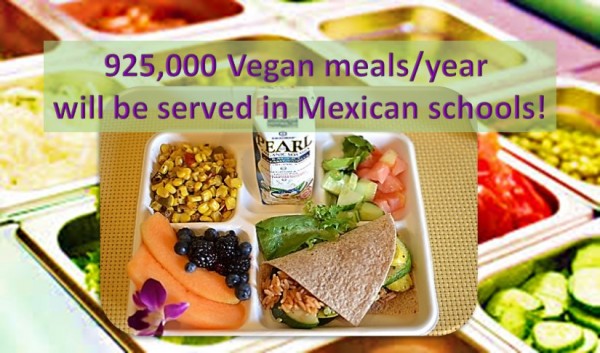 This announcement came out recently after an agreement between Mexican Government and Mercy for Animals “Come consciente” Latin food policy program. Come Consciente is “Conscious Eating”.

In August 2017 Public health advocates and Animal welfare tasted a major victory in Mexico when the Permanent Commission of the congress passed a resolution urging the systems to serve meat and egg free meals one day a week.

According to WHO reports in Mexico, diabetes alone is responsible for 80,000 death every year.

From April this plant based Vegan food program is replacing 20% of animal products served in Veracruz, Mexico’s second largest state. Vegan meals will be served every Monday. According to Food policy specialist Coral Gonzalez, ‘by replacing 20% of its meat, dairy and eggs with healthy, eco-friendly plant based foods state of Veracruz is leading the way to brighter future’.

Vegan meals program is successfully running in both Brazil and Mexico. Veracruz is the first state to sign the bill to promote plant based education. This program introduces kids to healthier eating and develops consciousness about animals. Children will learn benefits of plant based food and develop taste for sustainable choices too.

It is a groundbreaking accomplishment for Come Cosncente, MFA Mexico and the state of Veracruz. All three organizations are in hopes to reduce the rate of childhood obesity and malnutrition as both are linked to learning problems in young children.

MFA is looking forward to working with other state Governments in Mexico to achieve same goals and implement more such conscious eating programs in schools to reduce childhood obesity.