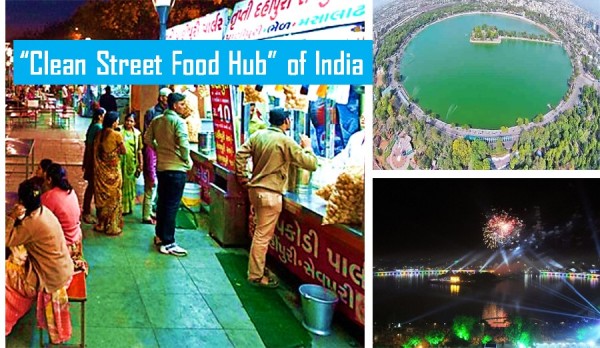 India offers varieties of street foods to those who enjoy eating out. These foods are delicious, and weekends families and friends while spending time outside flock into street foods. However, always there is a concern about public health and safety when it comes to street food. Eating unhygienic food can lead to serious health issues. Food contamination can be fatal to people.

Food authority of India is taking strict action to improve quality of street foods. FSSAI has been designating popular street food localities across the country as “clean street food hubs” if they fulfil certain food safety and hygiene criteria! For this reason, street food vendors including restaurants were offered training for hygiene practices.

After the training program initiated in India, nearly  20,000 street food vendors have been trained in best hygiene practices in New Delhi alone, and the training was extended to other states too.

FSSAI recently declared Kankaria Lake area of Ahmedabad as India’s first clean street food hub. For the next one year the food regulator hopes to give certificate and designate  such streets across the country.

Kankaria lake is one of the oldest, 15th century lake in India with around 66 street food vendors. It serves popular street food for approximately 12 million people each year.

According to Pawan Agarwal, CEO of FSSAI, “There is an 80% cut off and anything above that is outstanding. These people have done a fabulous job in reaching up to that level, and now it is about maintaining the standard. The state food regulator will be conducting regular inspections to keep a check”.

FSSAI with Gujrat Food and Drug control administration and other agencies conducted pre-audit of the street food earlier this year. During the pre-audit suggestions were given for improvement of the quality and training to food vendors regarding hygiene of food. Vendors made those necessary changes and won the designation “Clean street Food Hub of India”

Law Garden, another popular tourist place, is also in line to become the second place in Gujarat for the project. While sharing the details, H G Koshia, food safety commissioner, Food Drug and Control Administration (FDCA) said, “Kankaria Lake and Law Garden, also known as Khau Galli in Ahmedabad, are the two places which are considered to be declared as clean street food hubs. We are now in the final stage of declaring Kankaria Lake as the country’s first clean street food hubs.”

“With this tag of clean street food hub by FSSAI, it will get a value addition. All the vendors are following the necessary procedures, including wearing apparel, hand and head gloves, using packaged water, maintaining cleanliness around the stall, using carpets, etc.” he added.

“Earlier, these vendors were using tanker water to prepare the food. In 2012-13, FDCA, through its continuous training and awareness drive, helped these vendors connect with packaged bottle companies to supply the water. But now, consumers can now be fully assured of the quality of food and hygiene,” stated Koshia.

This initiative will raise hygiene standards and revolutionize street food vending in India, making it popular among both domestic as well as international tourists while preserving rich culinary heritage of India. It will nudge the street food vendors into a food ecosystem and globally the demand and esteem of Indian street food will reach high.