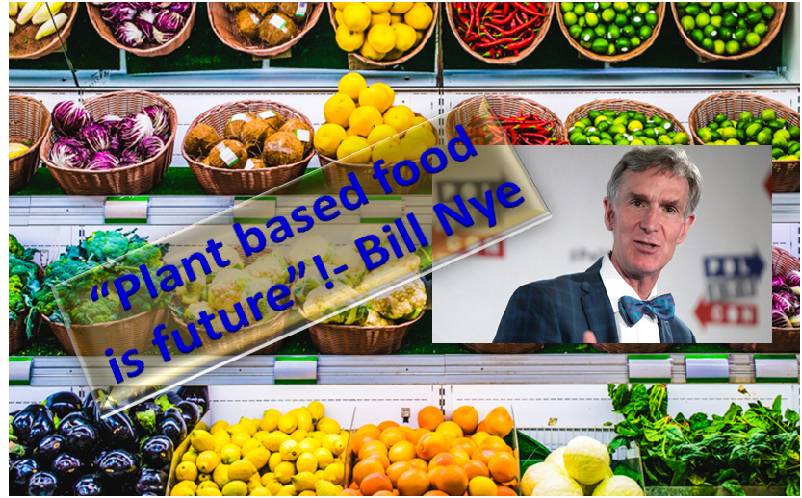 The Science Guy says he’s looking forward to “the emergence of new plant-based dishes,” as vegetarian and vegan diets have been proven to better for one’s health and the environment.

In a recent “Ask Me Anything” on Reddit, Bill Nye (aka “The Science Guy”), recommended a plant-based diet to combat climate change. Over 10,000 questions were asked in the threat, but Nye chose to address the following:  “What are your thoughts on animal agriculture and the promotion of a vegan diet as to reduce our impact on climate change?”

“Plant based diets are the future. I look forward to food preparations that are not ‘derivative bits,’ as we say in comedy writing. Instead of ‘coconut bacon,’ for example, I hope there is just delicious stand-alone coconut preparations. Cooking is a competitive business. I look forward to the emergence of new plant-based dishes.”

This isn’t the first time Nye has suggested that vegetarian and vegan diets are bound to become more popular. During a 2015 lecture at the University of Central Arkansas, Nye mentioned that “plant-based diets may be the future.” Nye’s opinion has likely been constructed from the mounting evidence which suggests that plant-based diets are better for one’s health and, most importantly, the environment.

Animal agriculture is responsible for 18% of all greenhouse gas emissions – more than the combined exhaust from all transportation. Additionally, livestock and their byproducts account for at least 32,000 million tons of carbon dioxide (CO2) per year or 51% of all worldwide greenhouse gas emissions. Finally, converting to wind and solar power will take 20+ years and roughly 43 trillion dollars; it is for this reason that improvements in dietary and lifestyle choices are so important.

When an individual decides to consume more fresh fruits, vegetables, grains, seeds, legumes, nuts and leafy greens, they are deciding to fill their body with nutrient-dense, fiber-rich foods which support optimal health and have a low carbon footprint. One might also feel better knowing they are not supporting a cruel industry which treats animals as if they are nothing more than collateral.

Thanks to Bill Nye speaking out about plant-based diets and climate change, perhaps more activists will consider adopting vegetarian or vegan diets to benefit the Earth and future generations.

By  Amanda Froelich in http://www.trueactivist.com/