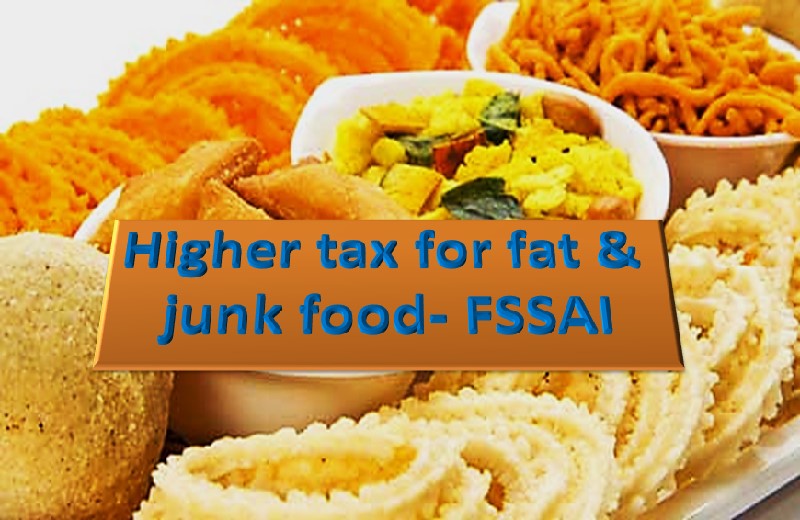 Are you fond of junk food? Then be prepared to pay more price for your favorite junk foods!!  Yes, to put a control on the obesity and over eating of junk food that contains high amount of  Fat, Sugar and Salt (FSS) FSSAI has suggested corrective measures.

These measures came out after FSSAI’s recent report (May 9, 2017) on consumption of Fat, Sugar and Salt (FSS) and its health effects on India’s population.  There is a growing concern regarding the increase in consumption of FSS by the overall population and the result in growth of chronic conditions.

As per the FSSAI report “The country’s existing nutrition and public health policies fails to provide vision and urgent steps that are needed to tackle the rising problem of overweight and obesity due to increasing urbanization, sedentary lifestyles and unhealthy diets. Thus, we need to recognize and formulate strategies to reduce the burden of risk factors that fuel the chronic disease epidemic. One such established risk factor is unhealthy diet, especially those high in trans and saturated fats, refined sugars and salt.”

Salient feature of the report:

The FSSAI 2006 Act does not define the term junk food. However, the name Junk food popularly refers to foods which do not have positive nutritional value and in fact when regularly consumed may rise the risk of chronic diseases. These foods are also known as fast foods. Indian deep fried foods like samosas, pakoras and western foods like burgers, pizza, chips, sugar-sweetened beverages come under the junk food category.

Per recent health reports from India (and other parts of the world), there is an alarming rise in certain conditions due to obesity and by consuming junk food. Many Governments already have taken action against this. In United Kingdom tax has been introduced on fat so that the price of junk food goes up.  In Chile, a total ban has been imposed on ads that has high FSS in foods and beverages in children channel. All these regulations make consumers to (probably) think before they spend money on unhealthy foods. In India, State of Maharashtra announced ban of junk food near school territories and in canteens.  An expert group that involves Medical professionals, Nutritionists and Dietitians has come up with a detail report and based on the report FSSAI suggests the following measures –

Do you think FSSAI’s these measures helps to create public awareness regarding junk food? Comment in the box below.