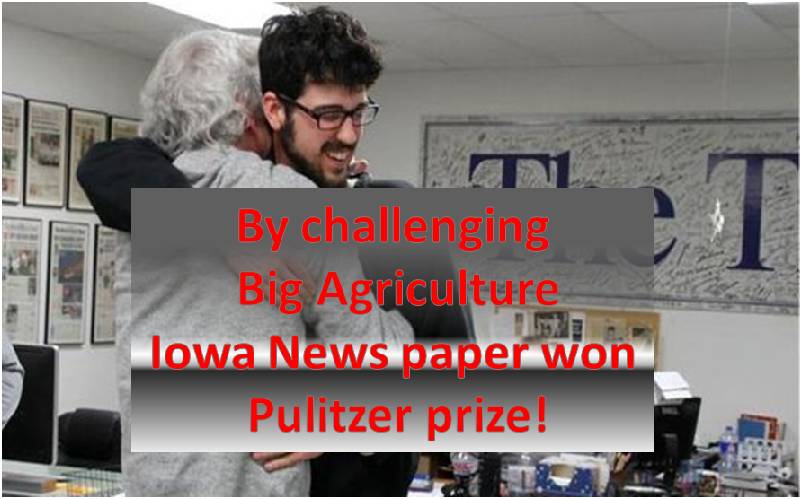 Art Cullen, 59, of the Storm Lake Times, has been awarded a Pulitzer Prize in the category of Editorial Writing. Cullen co-owns the twice-weekly newspaper with his older brother John, where it reaches a circulation of 3,300 in the little rural town of Storm Lake, Iowa.

The Storm Lake Times employs about 10 people, and it’s largely a family business. As a small town publication, they cover the usual range of topics: “We strive to have a baby, a dog, a fire and a crash on every front page, so, yes, we do pander,” Cullen told the Washington Post.

In any case, it was Cullen’s unwavering dedication to report on the clandestine ties between big agriculture and government that earned him the recognition, along with a $15,000 prize. Of course, his work hasn’t always been well received. Some have accused him of taking an “anti-farmer” stance. “We took a lot of heat,” Cullen explains, “My wife grew up on a farm. I got sh−− on my boots. I ain’t anti-farmer, but I’m anti-pollution.”

In his articles, as sharp as they are eloquent, Cullen explores the major players, funding schemes and misdirected policies that perpetuate Storm Lake’s murky surface water problems. “The Kochs and Monsanto have too much at stake to leave it to the people of Iowa to decide how to manage agriculture and a clean environment in a sustainable way that allows farmers to prosper,” Cullen wrote in his July 2016 piece “They Don’t Know”.

Last year, Des Moines Water Works threatened to sue Storm Lake’s home county of Buena Vista and two other counties for releasing agricultural runoff nitrogen into Raccoon River — where they get their drinking water. The counties battled the federal lawsuit using money from undisclosed sources, and big agriculture is suspected of involvement in these funding schemes. Cullen demands transparency.

Cullen insists this is an issue extending far beyond the Midwest, and especially causing contamination of the Gulf of Mexico. “They’ve changed the entire agricultural system since 1980, without any consideration how it affects groundwater or surface water. It’s a national story. It’s just that it happened in our front yard and we’re still reporting on it,” says Cullen. Along with the changes, he’s seen soybean and corn consume the industry, while cattle grazing fields have transformed into packed feed lots.