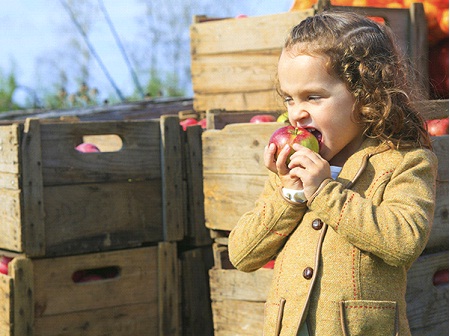 Due to the antibiotic and pesticides commonly sprayed on fruits and vegetables, children may now struggle getting their ‘5 a day’ due to allergies.

More than 150 scientists and 50 farmers came together several years ago to support stricter limits on antibiotic-use in present-day agriculture as part of a broader effort to tackle the public health crisis caused by increasing antibiotic resistance. But recently, in a case highlighted in the Annals of Allergy, Asthma, and Immunology, the concern has returned with a much stronger vengeance than before. Not only are antibiotics used in livestock a concern to human health, but the antibiotics being used on fruits and vegetables are causing big problems.

As reported in the journal, one 10-year-old girl who ate a blueberry pie had a near-fatal allergic reaction. When investigated, it turned up that it wasn’t the blueberries that she was allergic to, but the antibiotic streptomycin. The blueberries had been treated with the antibiotic to keep bacteria, fungi, and algae from growing on the fruit.

Farmers are increasingly turning to antibiotics to eliminate pests that are often caused by depleted soil – a byproduct of conventional agricultural practices. The number one culprit? Mainly from growing pesticide and herbicide-doused GMO crops. It should be noted that not only are toxins added to the soil, stripping it of important enzymes that plants need to fight off pests, but out of the 80+ minerals that were originally in nutrient-rich soils, modern methods only replenish about 4-5. That means not only are plants less resistant to pests, but super-weeds can easily grow out of control.

What’s more, crops that are grown in depleted, biotech-influenced-soils are more susceptible to insect infestations, viruses, and diseases. That’s exactly why Monsanto’s Round Up is one of the best selling chemical herbicides in the entire world – no matter that it causes Hodgkin’s Lymphoma, autism, kidney disease, and birth defects.

“The 10-year-old girl who suffered an allergic reaction to some blueberries is a more common phenomenon these days,” according to Dr. James DeAngelo, an allergy specialist. Children are popping up with allergies to fruits and vegetables all the time, but what they’re truly allergic to are the chemicals being sprayed on the plants they’re meant to be eating.

“This could explain why so many people insist they’re allergic to berries, but when we test them to berries, they’re negative, and then they re-consume berries, they seem to tolerate them.”

According to Dr. DeAngelo, allergies to any kind of berry are extremely rare. But that must mean that the public is consuming an awful lot of contaminated produce laden with pesticide residue.

The doctors who published this journal believe that traces of streptomycin and other antibiotics on produce, meat, and in the water supply can add to the rising incidence of fruit and vegetable allergies. Obviously this is not good, as fruits and vegetables are the most nutritious foods available to mankind.

While many European countries have prohibited the use of antibiotics on food, they are still allowed in the United States and in Canada. As long as consumers continue to follow Big Agriculture’s advice for growing food, more problems like food allergy to fruits and vegetables can be expected to arise. If children can’t even eat their greens anymore due to the overuse of antibiotics, what do we really expect to happen to the health of the nation – or the world?