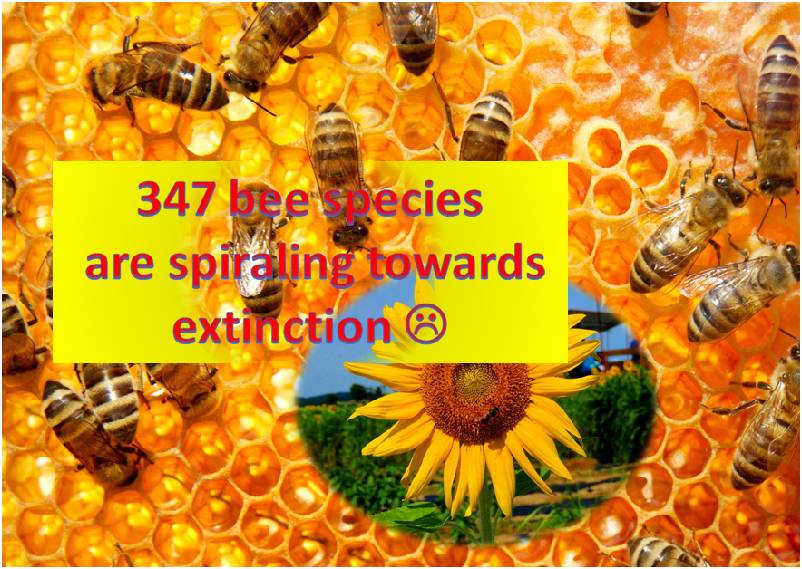 (Soon we, human beings are hitting a crisis. If we don’t wake up now, we will be losing all bee species that are critical for nature. Most plant pollination happens because of bees. Pollination is an important phenomenon for survival of nature and plants. Bees being important pollinators helps in balancing the nature. Hundreds of bee species (347 species) are spiraling toward extinction. This is not good news. With bees comes honey and seeds. If there are no bees, we may lose many plant species too. Think about this and take action. Spread the word. Read more… Healthylife.werindia.com)

A recent analysis has revealed that 347 bee species that are native to North America and Hawaii are “spiraling towards extinction”, according to reports. A total of 700 bee species are currently facing major threats, which include an increase in pesticide use, together with severe habitat loss. In “Pollinators in Peril: A systematic status review of North American and Hawaiian native bees,” the Center for Biological Diversity studied a total of 4,337 native species in order to assess how the vital pollinators are enduring worsening, multi-fronted threats. Kelsey Kopec, pollinator researcher at the Center for Biological Diversity and author of the study, told EcoWatch,

“The evidence is overwhelming that hundreds of the native bees we depend on for ecosystem stability, as well as pollination services worth billions of dollars, are spiraling toward extinction. It’s a quiet, but staggering crisis unfolding right under our noses that illuminates the unacceptably high cost of our careless addiction to pesticides and monoculture farming. The widespread decline of European honeybees has been well documented in recent years. But until now, much less has been revealed about the 4,337 native bee species in North America and Hawaii. These mostly solitary, ground-nesting bees play a crucial ecological role by pollinating wild plants and provide more than $3 billion in fruit-pollination services each year in the United States.”

Following this, a second study was also published at around the same time by the Intergovernmental Science-Policy Platform on Biodiversity and Ecosystem Services and found that they had come to the same conclusion. Reports from the United Nations’ Food and Agriculture Organization said, “A growing number of pollinator species worldwide are being driven toward extinction by diverse pressures, many of them human-made, threatening millions of livelihoods and hundreds of billions of dollars worth of food supplies, according to the first global assessment of pollinators.”

Essentially, this means that the decline in pollinators is not unique to one region or continent, but is, in fact, a current worldwide issue. Some nations already have new insect protections set in place, which include pesticide restrictions or bans, as well as wildlife corridors. The United States currently continues to back corporate agriculture and the chemicals that the industry relies on to function. The seriousness of the species declines lies in the fact that reports have stated that one-third of the world’s food supply depends on animal pollination.

The FAO explains, “There are more than 20,000 species of wild bees alone, plus many species of butterflies, flies, moths, wasps, beetles, birds, bats and other animals that contribute to pollination. Pollinated crops include those that provide fruit, vegetables, seeds, nuts, and oils. Many of these are important dietary sources of vitamins and minerals, without which the risks of malnutrition might be expected to increase. Several crops also represent an important source of income in developing countries from, for example, the production of coffee and cocoa. Between US$235 billion and US$577 billion worth of annual global food production relies on direct contributions by pollinators.”

Researchers from the Center for Biological Diversity study found from their collected data that 749 species out of 1,437 that they assessed were actively declining, which is over 50%, with 25% of those on the brink of extinction. After a year analyzing collected data, Kopec said,

In order to stop the extinction of the pollinators, the governments will need to put common sense and preservation for future generations ahead of corporate and industry profit, according to reports. The Center for Biological Diversity analysis concluded, “We need to take aggressive steps to better understand and protect our precious bee species before it is too late.”

Author: HealthyLife | Posted on: March 7, 2017
TAGS: Bee ExtinctionBenefits of HoneyBiological DiversityFood ActivismFood and AgricultureHoney BeespollinatorsUnited States
« Previous Article Next Article »
« This Chicken in tutu is a therapy animal MAGGI BAN: Maggi going off the shelves – Which are some alternative healthy foods? »