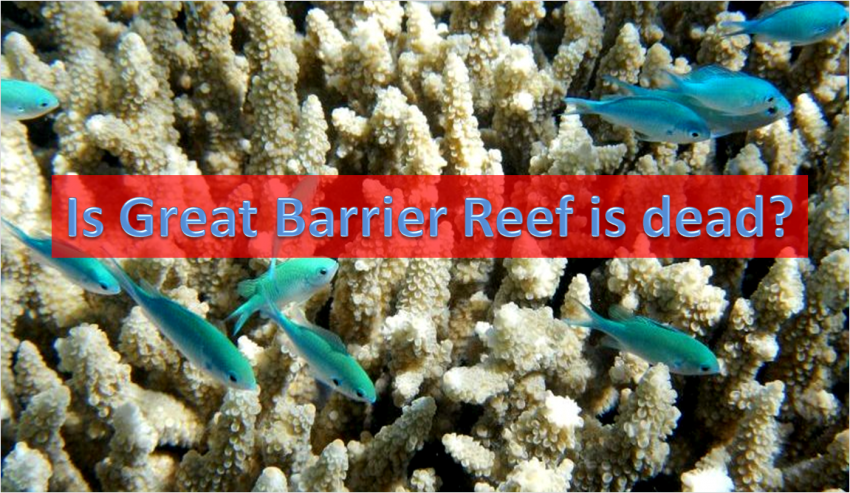 The world heritage site, The Great Barrier Reef is a site of remarkable variety and beauty on the north-east coast of Australia. It contains the world’s largest collection of coral reefs, with 400 types of coral, 1,500 species of fish and 4,000 types of mollusks. It also holds great scientific interest as the habitat of species such as the dugong (‘sea cow’) and the large green turtle, which are threatened with extinction.  Continuing global warming and human blunders are threatening this heritage site.  Recently article said that the reef is dead. But, the fact is it is not dead and is under deep trouble. It means we should not give up and take serious actions to protect this site – Healthylife.werindia.com

While the horrific and historic bleaching of the Great Barrier Reef this past May caused global concern and worry over the fate of the planet’s largest living structure, many of those who reported on the issue said that most of the reef was expected to mostly recover. Sadly, five months later, that doesn’t seem to be the case. The world’s largest reef system, spanning an impressive 1,400 miles off of Eastern Australia, experienced severe coral bleaching in 95% of its individual reefs and large swaths of the Northern section of the reef died completely.

Coral bleaching refers to the condition whereby coral, the living organisms that excrete calcium shells which serve as the reef’s structure, die in massive numbers, leaving behind an eerie, lifeless skeleton. Though reefs in the past have been able to recover from bleaching events, the extent of bleaching currently being experienced is extensive. Official estimates earlier this year, when the bleaching occurred, assumed that half of the reef that had bleached would recover. Yet, environmental activists and locals have recently confirmed that the Great Barrier reef is not repairing itself the way it should be, raising concerns that the entire reef system could die in as little as 2 years.

Yet, record coral bleaching events are by no means exclusive to Australia. Other reefs around the world are also experiencing equally catastrophic die-offs. For example, in the Caribbean, 80% of all coral reefs are now completely gone. Coral reefs are complex marine ecosystems and despite covering only 0.1% of the Earth’s surface, they contain 25% of all known marine species. The term “all known” species is used because scientists say that it will take years to catalogue all of the species that live in the reefs. It could, in actuality, be much higher than 25%. They are essential to the planet’s entire oceanic ecosystem and their absence could easily push the world’s already stressed oceans over the brink, bringing on full-scale ecosystem collapse.

Almost all coverage of the reef’s dire situation point to global warming as the seemingly obvious culprit, but is this really the case? There is extensive historical evidence suggesting that, within the bounds of human history, the temperature of the world and its oceans was once much higher. Studies of tree rings in England revealed that the climate used to be significantly warmer during the height of the Roman Empire through medieval times. This corroborates with Roman accounts of successful harvests of warm weather crops, such as grapes, in England, which, in today’s current climate, would be near impossible. If ocean temperatures were the main cause, wouldn’t there be historical records of massive coral die-offs or any of the other phenomena blamed on global warming, such as massive fish kills, record red tide, and huge oceanic dead-zones?

It appears, at least in this case, that global warming is being used to distract from the most likely cause of oceanic suffering and degradation – massive and unprecedented pollution. Indeed, the world’s oceans have also become the world’s dumpster. From the massive plastic garbage patch swirling in the Pacific Ocean to the ever-leaking nuclear reactors of the Fukushima nuclear plant, the ocean is experiencing unprecedented levels of toxic sludge, not unprecedented temperatures. There is plenty of science to back up this claim as reef degradation has been directly linked to land-based pollution as well as over-fishing. Why is there no media uproar regarding these issues?

Many of the world’s most recent fish kills have been linked to agricultural run-off or industrial chemicals, not global warming Credit – New York Times

Since 1970, half of the world’s marine life has died and massive fish kills are quickly becoming the new normal. They are not dying from heat stroke, they are dying from the consumption of plastic and exposure to highly toxic industrial waste. In the case of the Great Barrier reef, it is the waste dumped into the ocean by Australia’s mining companies that are really to blame for its dire state. In fact, Australia’s government recently removed all mention of the Great Barrier reef’s endangerment from a UN report amid plans to expand coal mining and shipping from the reef. Australia is the world’s fourth-largest coal producer and most of that waste ends up in the oceans. Why would Australia’s government do that if the culprit behind the reef’s suffering was ostensibly rising ocean temperatures out of their control?

It is this pollution, not global warming, that is killing the world’s reefs. If the reefs all die, which is now expected to happen within the next 5 years, oceanic biodiversity will decrease exponentially and, combined with the fish and animal kills also caused by extreme, excessive, and unnecessary oceanic pollution, the global oceanic ecosystem will collapse entirely. The ocean will stop living. Wildlife dependent on the ocean may follow as well, including many humans. This is not Australia’s disaster. This is a global disaster that threatens our world and the reefs’ decline is its most alarming symptom. This is not something that may happen in the future. It is here now. Right now. We are living in its midst. This is not global warming, this is pollution caused by irresponsible and out-of-control governments and corporations – and it’s time to hold them accountable.