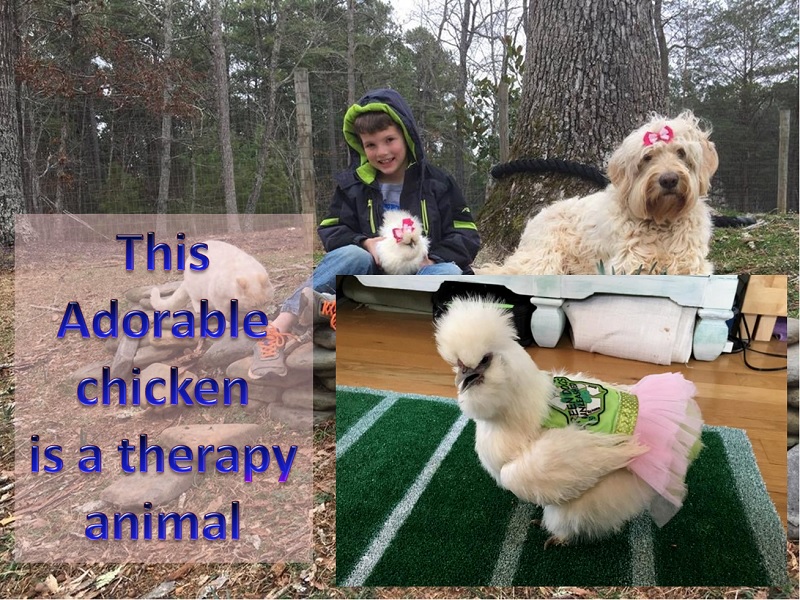 This chicken wears a tutu and comforts people while raising awareness about animals.

Though Erika Proctor works as a dog rescuer with her nonprofit organization Green Dogs Unleashed, she isn’t the type to turn away an animal just because they aren’t of the canine variety. A very special chicken named Darla is proof of this, and she’s a testament to the love all animals are capable of and the devotion humans can feel towards nontraditional pets.

When Erika and her son, Finn, went to a fair, they came across some very sad-looking and sickly chickens. Though he was aware that the chickens would likely not survive, Finn told his mom that he wanted to take them home so that the chickens could experience love before they died. They took home three chickens, but only one of them, Darla, survived.

The Proctor family is no stranger to working with special needs animals, as their organization aims to help and re-home deaf and blind dogs. Darla was no different, but as her strength prevailed over her sickness the family knew that she would be alright. What they didn’t expect was for the little chicken’s personality to stand out above the rest and win everyone over.

Though Darla spends time in the chicken coop with her friends, she often enters the house as she pleases through the doggy door to hang out with her boy, Finn. They often play together and Finn zips her up inside his jacket when it’s cold out. She gets along great with the other animal family members, including the cat, and even sat with the blind Great Dane, Serendipity, when she took her last few breaths recently.

While many have heard of therapy dogs and cats and seen them in action at hospitals or universities during finals, there are other animal species that undergo the training and become certified. Green Dogs Unleashed has a therapy dog certification program, which aims to train dogs with the right disposition to comfort humans during rough times, and Erika thought that Darla would be the perfect fit.

Since Erika wants people to see chickens as loving, adorable animals, she dresses up Darla and dresses up her feathers to present Darla’s best self on the days they visit humans for therapy events. Erika told The Dodo, “There is a bit more an element of surprise when you show up with a chicken in a tutu.” She added, “Many people see chickens as only a source of food. Having people — children especially — get to know a chicken personally, brings a new level of education and awareness to the animals.”

People that know Darla personally have said that, knowing her personality, it just “makes sense” to have her as a therapy chicken to raise awareness about animals and bring comfort to humans. Darla isn’t the only one of Erika’s pets that are changing what it means to be a therapy animal, however; Erika is in the process of trying to get Darla, a goat, and a mini horse approved for a school therapy animal.

Finn told The Dodo that Darla’s role as a therapy chicken helps people see “that chickens are people too. OK not really people, but they deserve the same respect as everyone.”

It’s absolutely heart-warming to see an animal normally considered livestock instead changing peoples’ perspectives on chickens and other animals used for food. These small moments are made possible with humans like Erika and Finn, who continue to fight to raise awareness about an animal’s true nature.