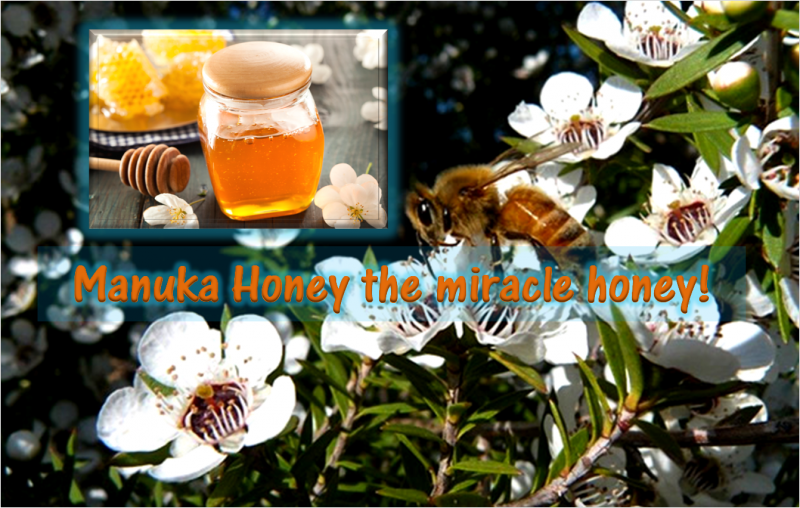 Everyone knows the health benefits of honey. It is energy booster, it is replacement for sugar, it is a good preservative, cough suppressant, dandruff control agent, useful in treating wounds and burns, good for skin and many more.

Except for infants it is proven to be good for all. There is a special honey namely Manuka honey obtained by bees visiting this particular bush – Manuka bush in Australia and New Zealand has more power than other honey types. What is so special about Manuka honey? Read more on… Healthylife.werindia.com

Not only does it kill bacteria, but it prevents them from building up an immunity – a major problem with most antibiotics today.

In 2009, scientists revealed a study that found a honey better than all antibiotics out there. It was published by the European Journal of Clinical Microbiology and Infectious Diseases in June of 2009, and was incredibly significant during a time when many antibiotics out there were failing against “superbugs”.

This unbelievable honey is called Manuka honey. Bees forage on the nectar of the New Zealand “Manuka bush” or “jelly bush” (Leptospermum Scoparium). These trees are native to Australia and New Zealand alone.

The honey has become so popular, in fact, that shortages of Manuka honey have been reported. Fake products have been sold due to the high demand, causing New Zealand Manuka producers to get a trademark protection (UMF).

What’s amazing about Manuka honey is that not only does it kill bacteria instantly, no bacteria it has encountered is able to adapt to it. None of the superbugs killed by the honey were able to build up immunity; a current major problem with today’s antibiotics.

According to Dr. Dee Carter of the University of Sydney’s School of Molecular and Microbial Biosciences, there are compounds like methylglyoxal in the honey that cause a multi-system failure in bacteria.

The Australian researchers who developed the study concluded that the honey “killed every bacteria or pathogen they tested it on. [It can be] applied topically to fight against infections of the skin like cuts and insect bites or taken internally”.

WHAT CAN MANUKA HONEY TREAT?

A recent study suggests that the honey can be used to prevent gingivitis by reducing plaque build-up, and has been approved by the National Cancer Institute to reduce inflammation of the esophagus caused by chemotherapy.

WHERE CAN YOU BUY YOURSELF THIS SUPER HONEY?

Supply is in short order due to high demand and many scammers have taken advantage of the situation. Don’t buy Manuka honey that doesn’t have the ‘UMF’ – or Unique Manuka Factor – trademark.

Only genuine Manuka honey has the phytochemical property derived from the Manuka bush, giving it its bacterial fighting properties. However, genuine manuka honey can still be found in health stores or online at Amazon, or through NZ or Australian markets.

Article by Alexis Henning at : http://www.trueactivist.com/