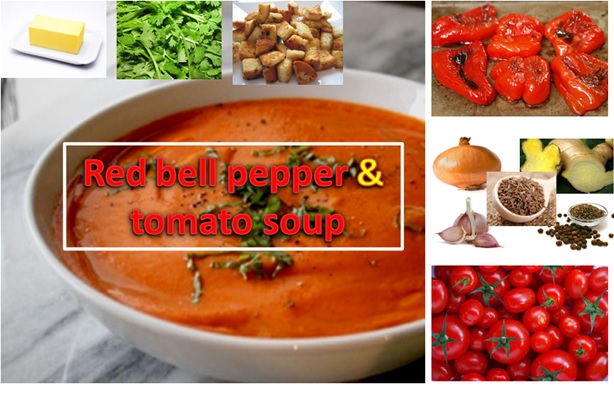 Bell pepper is not only an excellent source of carotenoids, but also a source of over 30 different members of the carotenoid nutrient family. A recent study from Spain took a close look vitamin C, vitamin E, and six of these carotenoids (alpha-carotene, beta-carotene, lycopene, lutein, cryptoxanthin and zeaxanthin) in all commonly eaten foods and found that only two vegetables contained at least two-thirds of all the listed nutrients.

Tomatoes are one of the healthiest food and has several goodies in it. Tomatoes are widely known for their outstanding antioxidant content, including rich concentration of lycopene. They are rich source of vitamin C, vitamin K and Tomatoes contain all four major carotenoids: alpha- and beta-carotene, lutein, and lycopene.

Try this simple and easy recipe of vegetarian soup that has both these good vegetables as main ingredients.