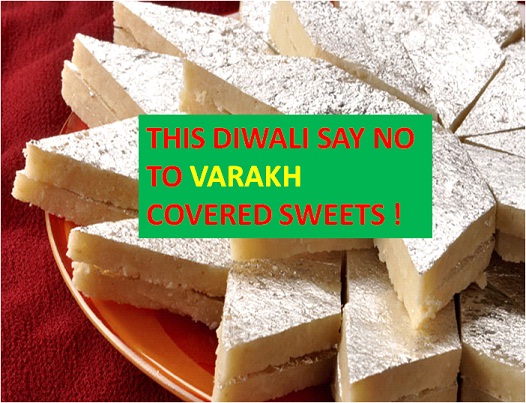 Silver traditionally represented wealth, and that association extended to sweets to convey ‘meant for the wealthy’ Silver was also considered an aphrodisiac. Silver is widely used for various purposes in the market today. Silver is considered precious and its utility is enormous. The reason behind this is that silver reflects back 95% of the light energy that falls on it.

Edible silver and gold foils on sweets, on confectionery and desserts is not unique to the Indian subcontinent; countries such as Japan and Europe have long used precious metal foils as food cover and additive. Silver is also used in saffron syrup.

The reason for silver foil usage on Indian sweets possibly for one of these two reasons:

Why people do not want to eat sweets covered by Varakh?

Traditional varakh is made by pounding silver into a sheet a few micrometers thick, and backed with paper for support; this paper is peeled away before use. It is extremely brittle and breaks into smaller pieces if touched.

According to vegans and vegetarians today’s varakh is non-vegetarian material. Few years back Indian Airlines instructed to its food suppliers that sweets should be supplied without silver foil.

The investigation conducted by organizations like Beauty without cruelty and FSDA of India sheds some light on this. VARAKH is prepared by using important parts of the cattle or ox. Guts of cattle/ox are obtained from the slaughterhouse after butchering. Pulled gur from the animal is later handed over to the manufacturers of VARAKH. Before handing over the intestines, they are washed in the slaughterhouse to get rid of the blood and other remains on these intestines in the limited facility that is present in the slaughterhouse. Intestines are cut into small pieces and then are bound together as pages in a notebook. A silver block will be placed in the middle of these bound intestines, and the whole thing is placed in a leather bag and sealed. Experts, who know how to make VARAKH, pound the bag with wooden sticks, till the entire bag flattens out. The silver block would by this time be turned into silver foil. This Silver foil would now be separated from the intestine pack and will be placed on paper. This is VARAKH, which reaches the market ready for use. Even staunch vegetarians, who shy away from egg, unknowingly consume this as a part of sweet, pan and areca nut. Why the intestines of the cattle/ox? Why not something else? The reason behind using the intestines of the cattle/ox for preparing the VARAKH is because of the elasticity of the intestines. They do not get cut even after a severe pounding. This aspect is brought out in the magazine “Beauty without cruelty” and the Television show of Maneka Gandhi, “Heads and Tails”. In India, on an average an estimate indicates that 2,75,000 kilos of “Varakh” is consumed. Can you estimate how many cattle/ox are sacrificed for just a bit of taste?

Whether Varakh is vegetarian or non vegetarian – further research conducted on silver foils revealed following information: The silver cannot be digested; therefore, there are no benefits from its consumption . A study done in November 2005 by the Industrial Toxicology Research Centre in Lucknow on varakh says that the silver foil available in the market has toxic and carcinogenic metals in the thin silver foil, nickel, lead, chromium and cadmium. Over half of the analysed silver foils had lower silver purity than the 99.9 per cent purity stipulated by the prevention of food adulteration act of India. When such foil enters into the body, it releases heavy metals that can lead to cancer. The report also details the unhygienic conditions in which workers put silver in small leather bags and beat it into foil in filthy shops.

This Deepavali (Diwali) before consuming the sweets that have the silver foil cover think twice!