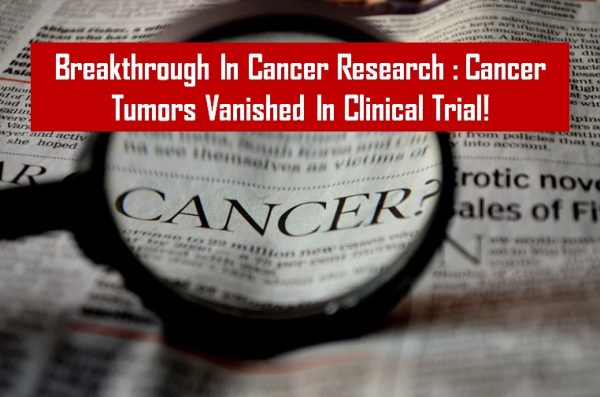 A small study published in The New England Journal of Medicine involving rectal cancer patients very recently witnessed a miracle when their tumors causing cancer disappeared, totally eradicated. In this trial advanced rectal cancer patients were treated and all 12 patients took a medicine called Dostalimab and in just six months their tumors shrunk and eradicated successfully.

According to Dr. Cereck study author and oncologist at Memorial Sloan Kettering Cancer Centre, New York – “What’s so remarkable here is that it eliminated the cancer. The tumors just vanished”

The trial set out to follow the study of drug Dostarlimab  with standard chemoradiotherapy and surgery in participants who did not have a clinical complete response. All 12 participants were tumor – free under MRI even after 6 months follow up.

Dostalimab drug under the product name Jemperli was approved by the Therapeutic Goods Administration in February 2022 for the treatment of adult patients with advanced or recurrent mismatch repair – deficient endometrial cancer.

The standard treatment for advanced rectal cancer is chemotherapy, radiation followed by surgical resection of the rectum. This procedure is quite toxic. Therefore present breakthrough is important. It is an immunotherapy drug, and it works by unlocking the body’s natural system to fight cancer.  Patients in the experiment were given Dostarlimab  drug every three weeks for six months. They were all in all most same stages of cancer; it was locally progressing in the rectum but had not spread to other organs.

This treatment is an immunotherapy, and it works by unlocking the body’s natural immune system to fight cancer.  Normally when immunotherapy is used in patients with advanced disease 10 percent of patients will have shrunken tumor but here it is 100 per cent which is really the most striking part of the treatment. This kind of therapy works in specific cancer cells in colorectal that are mismatch repair-deficient, so they lack a gene that enables them to repair their DNA. Mismatch repair deficient cells have usually a series of mutations that can lead to cancer and that the immune system should try to recognize as foreign.

Some tumors express an inhibitory receptor known as the “programmed cell death protein (PD-1)“, which causes down regulation of the immune system and stops white blood cells from doing their job. The drug being tested, dostarlimab, is an anti–PD-1 monoclonal antibody – which means it blocks the PD-1 receptor so an immune response can be activated. It was administered in participants with mismatch repair–deficient stage II or III rectal adenocarcinoma every three weeks over the six-month trial phase period.

“When we give immunotherapy like dostarlimab, it really just revs up the immune system so that it sees the cancer and gets rid of it.

It’s really what cancer doctors dream are made of to see response like this -Dr. Cereck

After treatment with drug Dostarlimab, all 12 rectal cancer patients were examined using MRI, PET scan, endoscopy and scans showed no tumors.  This is the first time this has happened in the history of cancer according to Dr. Luis A. Diaz J. of New York’s Memorial Sloan Kettering Cancer Center.

Researchers who conducted studied the medicine told media that treatment is promising but large scale experiment is needed to determine whether it will work on larger number of patients and will it work on people if the malignancies are actually in remission.

What is next ? The future of immunotherapy.

Dr. Cercek in an interview with CNN explained that their goal is to expand the new technology as a treatment for advanced disease and also to include early stage disease as well and other forms of solid tumors and cancers that are mismatch repair deficient.

“Our goal is to replicate this in other solid tumours such as stomach cancer, pancreas cancer and bladder cancer, that are mismatch repair-deficient where they have this potential sensitivity to immunotherapy.”

“We may be able to achieve that as well in patients with stomach cancer where surgery may not be needed if they have the same type of really remarkable response.”