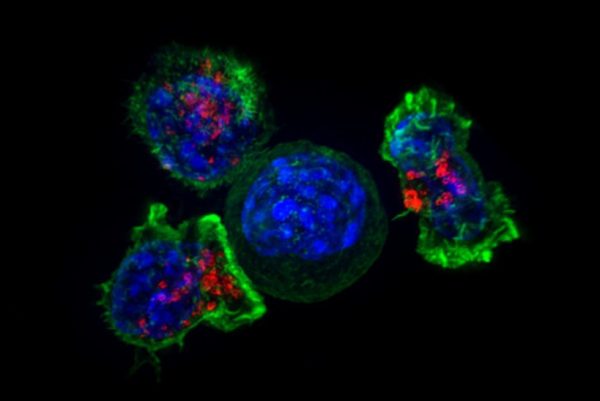 New discoveries and inventions in cancer research is happening almost everyday.  This year there are many promising research reports published by several Cancer Research Institutes across world. Earlier this month another research publication reveals a new discovery in human body “kill switch” that destroys cancer cells. Scientists have found a genetic kill switch that when activated destroys cancer cells.

Cells in animal body always created and killed. In human body about 300 million cells die every minute and replaced by new ones. Reason for this is to protect human body from aging and malfunctioning cells that could cause diseases. However, it is different with cancer cells as cancer cells does not care human immune system and its instruction for self-destruction.

Group of researchers at Northwestern University found a mechanism in human body by which every human cell can be programmed for self-destruction. This is similar to suicide action. Earlier this month these researchers found the genetic code that is essential for conducting this action sequence.

Research work on this discovery was  published in Nature communication and eLife.  Study states that  the instructions of death of cells are available ‘as information’ in both large RNA and microRNAs.  During chemotherapy cancerous cells are activated to destroy.  Like this, scientists used small intergerning RNA type called (si)RNAs to initiate toxicity in cancerous cells. Researchers tested more than 4000 different combinations of nucleotide bases before finding the six nucleotides in RNA that destroy cancer cells. Earlier reports suggested that microRNAs can be introduced to cancer cells to trigger self-destruction!

According to Professor Marcus E. Peter, who is lead author of the published article “Now that we know kill code, we can trigger the mechanism without having to use chemotherapy and without messing with the genome. We can use these small (si)RNAs directly, introduce them into cells and trigger the kill switch”. This method is similar to immune system function because both utilize natural mechanisms of the body.

Worldwide cancer survival rates are promising than before. However, there is less progress when it comes to cancer treatment methods. In US alone 609,640 people die because of cancer. The most common cancers are lung, prostate cancer, colon and rectum cancer, skin melanoma, non-Hodgkin lymphoma, kidney and bladder cancer, pelvis & endometrial cancer, leukemia, pancreatic cancer, liver cancer and thyroid cancer.

“My goal was not to come up with a new artificial toxic substance” said Dr. Peter in his statement.  “Improvements are often due to better detection methods and not to better treatments.” Present finding may be tapping into one of nature’s original kill switches and will help to cure many cancer types by disrupting the life of the cancer cells.

One Comment on “Cancer cells can commit suicide by kill switch”