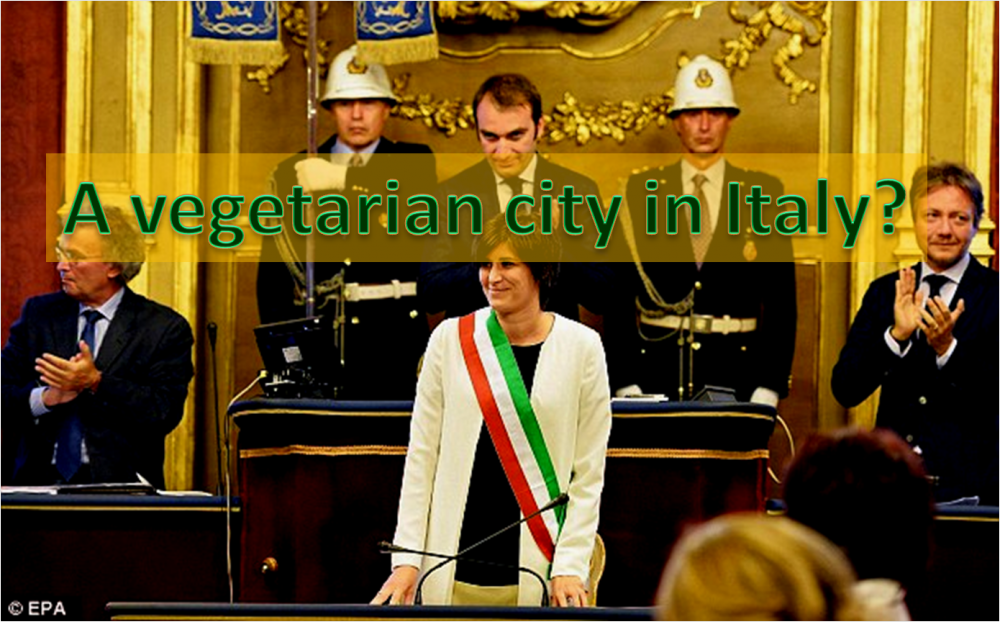 Chiara Appendino, who defeated the incumbent Democrat Piero Fassino in June, belongs to anti-establishment party, Five Star Movement which was founded by Italian comic Beppe Grillo in 2009 and has come out of nowhere to become what appears to be a dominant force in Italian politics. Appendino became the city’s third female mayor following in the footsteps of Maria Magnani Noya, who was elected in 1987, and Giovanna Cattaneo Incisa, who became mayor in 1992.She a multilingual businesswoman, helps run her family’s laser equipment company and is married with a young daughter.

The mayor counts her interests as reading, travelling, visiting the mountains and sea and playing football. In an online profile she reveals how she can speak, English, Spanish and German and studied international economics and management at university.

It is the first time the promotion of a plant-based diet has been included among the political aims of a local government in Italy.

“The promotion of vegan and vegetarian diets is a fundamental act in safeguarding our environment, the health of our citizens and the welfare of our animals,” the program stated. “Leading medical, nutritional and political experts will help promote a culture of respect in our schools, teaching children how to eat well while protecting the earth and animal rights”.

The council says it will spend the next five years educating the city’s children about the issues surrounding food in order to reduce the amount of animal products eaten by future generations.

But the plan has raised a few eyebrows in the city, where most restaurants still serve up traditional dishes made from the renowned local meats and cheeses that have been a staple for generations. There are numerous famous meat dishes in the Piedmont region such as brasato al Barolo, beef braised in the area’s most famous red wine and Carne Cruda – raw beef mixed with lemon juice and olive oil, and the public are unwilling to be dictated to.

How people of Turin is responding when their city is all set to become a first vegetarian city?

On Twitter Appendino has been accused of attempting to create a nanny state.

‘If you disobey [the mayor’s agenda] in Turin you’ll go to bed without dinner,’ one social media user wrote.

Turin resident Elena Coda told to an English-language news site The Local, ‘Great foods like wild boar ragu and Chianina steak are already disappearing from the menu once famed for its meats, wines and cheeses.’

But vegetarianism is undoubtedly on the rise in Turin with the city now boasting 30 vegetarian or vegan restaurants, most which have opened in the last few years.

31-year-old Giacomo Gambone, who hails from Turin, sees Appendino’s plan as a positive thing. ‘I like it,’ he said,’ it’s raising awareness among a crowd that is used to uniform thinking.’ He also points out that many of the traditional meat dishes in the region are kept for special occasions and Sundays, so doesn’t believe the move will make a major impact. I think people will still be encouraged in eating the odd meat specialty,’ he admits.

Stefania Giannuzzi, a new councillor for the environment appointed by Appendino, has been a vegetarian for 20 years and maintains that promotion of a plant-based diet is not meant offend Piedmontese meat producers.

‘I would not want to create a contrast with the meat industry. We do not want to close the small shops or ruin the people who have worked for years to develop the Piedmontese food and wine heritage,’ Giannuzzi told.