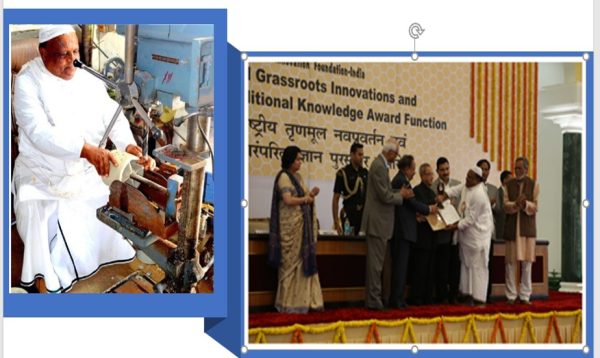 We love to share such inspiring stories where common people get recognition for their innovations and hard work. Abdul Khader Ndakattin recently received Padma award from Govt of India for his multiple innovation in the field of Agriculture. His innovation includes growing tamarind with scarce but alkaline water, innovation of a device that separates tamarind seeds from its pulp, ploughing blade manufacturing machine, seed cum fertilizer drill, automatic sugarcane sowing driller, wheel tiller etc.,  After his success with tamarind seed separator, Mr. Khader came with other innovations to help farmers for agriculture operations like ploughing, seeds sowing, fuel efficient water heating boiler. His works did not go unrecognized and Central Govt of India awarded him with prestigious Padma Shri award during Republic Day celebrations – Healthy Life.

Shri Abdul Khader Nadakattin, a serial grassroots innovator from Dharwad, Karnataka, is amongst the 107 Padma Shri awardees announced for the year 2022 in the Others (Grassroots Innovation) category.

His first innovation was a “A Wa(h!)ter Alarm,” which was his personalized attempt to solve his own nature of sleeping till late in the mornings. He tied a thin rope at the end of the key of the alarm in such a way that when the key unwound itself, the string tied to the key got wound. The string was in turn tied to a bottle filled with water, when the key was completely unwound, the bottle would tilt, and the water would fall on his face. Later he developed agri-technologies and implements which addressed a variety of needs for the local people while maintaining relevance with modern agriculture.

Supported by National Innovation Foundation (NIF) – India, an autonomous body of the Department of Science and Technology (DST), Government of India Shri Abdul Khader Nadakattin was conferred with a Lifetime Achievement Award in 2015 during NIF’s 8th National Grassroots Innovation and Outstanding Traditional Knowledge Awards by the then Hon’ble President of India Shri Pranab Mukherjee. True to his grassroots spirit and as a mark of respect for the award, he chose to walk barefoot and hence came to be known as the country’s “barefoot scientist”.

Owing to his portfolio of innovations related to tamarind, people started calling him “hunase huccha”, which means tamarind maniac. It started with his success in growing tamarind with scarce but alkaline water and further graduated with experiments like the technique for harvesting tamarind from the tree and also the highly accepted machine to separate tamarind seeds. This inspired him to develop a machine for slicing tamarind. In furtherance of success with tamarind, he came up with innovations to address agriculture operations like deep ploughing, sowing of seeds, and also fuel-efficient water heating boiler.

For several years in a row, the grassroots innovators are being recognized at different categories of the Padma awards, one of the highest civilian awards of India, which are given in various disciplines — literature and education, arts, science and engineering, trade and industry, civil services, public affairs, sports, and medicine and inspiring the generation to innovate further!