Delivering food to the poor 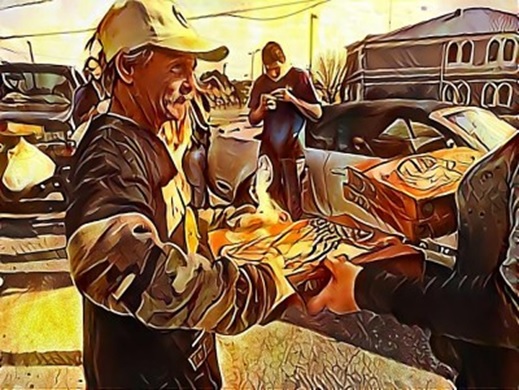 A group of friends in Florida decided to spend their Valentine’s day making a difference and delivering food to the homeless. 16-year-old Hannah Adams and her friends packed a van with 100 pizza boxes, along with donuts, coffee, and other snacks. They also brought toiletries, clothing and other items to donate to the local homeless.

The money needed for the food and clothing was gathered over several months through donations that were made through local churches and through street collections. The group is not affiliated with any school, group or church but are acting entirely on their own.

“I just thought it would be a nice thing to do. I think everyone should get a second chance, or some help if it’s available,” Adams said.

Although the group worked independently, they had some hope from local activist Amanda Velaski of Share the Love.

“We talked about it, and then Hannah called around to all these different places in town to see if they would match our purchases, and then we reached out to the community and were able to get people to donate so many items. We are making sure to give a gift bag to everyone, and those have a pair of socks, a toothbrush, hand sanitizer, soap, shampoo, deodorant, and toothpaste in them,” Velaski said.

The stores where the food was bought also made significant donations. The local Little Ceasars where they purchased the pizzas matched their purchase of 50 pizzas, leaving them with a total of 100 while the local Krispy Kreme arranged a similar offer.

The group that was assembled was spread out between four cars, that traveled around town helping the homeless for the entire day.

Veronica Garner and her husband were some of the people who were helped by the effort. They spoke with news crews after they missed their bus and ended up meeting up with the volunteers.

“We were waiting for the Trinity Baptist Church bus to pick us up and take us to their anniversary dinner, so we could get some clothing and a tarp for later, because it’s supposed to rain, and some batteries or a sleeping bag, but we missed the bus,” Veronica Garner explained.

“This is a blessing in disguise,” her husband Floyd added.

This type of selfless charity is exactly what we need in this world, and it is something that we have been seeing a lot more of in recent years.