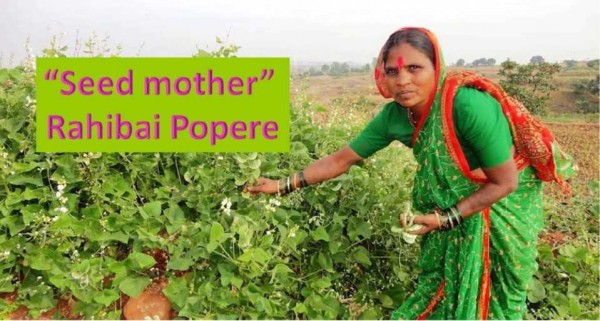 On this International women’s day, we remember contributions of many women in the field of food and agriculture system like Vandana Shiva, Alison Cayne, Brenda Hastings and others whose works made us think about agriculture and food positively. And our Seed mother Rahibai Popere from Maharashtra is one among them. Even though Rahibai has no formal education what she learnt from her forefathers is helping farmers of Maharashtra and other states in India to save and grow native crops. Rahibai Popere fondly known as “seed mother” was honored recently by Maharashtra Government and also by Indian Government Padmashri awardee. Read more…

In the age of modern Agriculture system, we see hybrid varieties of vegetables and crops that yield bigger in terms of size and quantity. They look nice, are also disease resistance and promise more nutrition value. Many companies have taken over today’s Agriculture system and companies are lobbying for mother earth. This has caused tremendous change in the way we look at crops. While farmers focus was on yield and size, the native crop varieties started suffering a lot and were threatened. As a result, many native crops are almost reached extinction.

How many of us know the importance of native crop varieties? Native crop varieties are not just disease and drought resistant but are nutritive and help in retaining soil fertility. Conservation of wild food resources and agro biodiversity is need of the hour for seed nutritional security and seed sovereignty especially in places where there is less and uneven rainfall and minimum water sources. To retain the native seeds heritage recently Maharashtra government inaugurated a seed bank where agriculture scientists and students can visit to learn about seed from “seed mother” Rahibai Soma Popere!

Rahibai Popere, 54-year-old mother who never went to a school learnt the importance of native crop in a hard way. She is a self-made expert in the field of agro-biodiversity, landrace conservation and several other innovative techniques in paddy crops cultivation. She hails from Kombhalne Village of Ahmednagar district of Maharashtra. She is known for her work on conserving and multiplying 48 indigenous landraces of 17 different corps including, hyacinth bean, paddy, pulses, oilseeds and millets!

Rahibai who grew up in a simple village background explains in confidence about her work. She offers training to students and farmers regarding seed selection, soil fertility, pest management and control. In addition, she supplies seedlings of native crops. She urges farmers to grow local varieties rather than hybrid varieties.

Rahibai started collecting native crop seeds many years ago. After seeing her grandson falling ill Rahibai was convinced that food grains and vegetables that contain ‘poison’ had made child unhealthy. She told her son to stop buying hybrid seeds, fertilizers and chemicals. She started collecting and saving indigenous seeds, which need just water and air for cultivation as per her experience. She established a small seed bank in her small mud house. Today Rahibai shares her knowledge on crop diversity. She is associated with BAIF Development Research Foundation (Formerly Bharatiya Agro Industries). Her work started in a nursery with black berry and hyacinth beans (nine types), rice, vegetables, beans landraces and shared them with 210 farmers of seven villages of Akole. Rahibai is an active member of Kalsubai Parisar Biyanee Savardhan Samithi a community seed bank in her small house for seed conservation and crop diversity revival along with wild food resources.

Rahibai established this seed bank to work towards a goal. Farmers are given seeds with the condition from her seed bank -that they return twice the quantity of seeds they borrowed!

‘One is the pioneer of one’s own life’: Currently there are about 122 native varieties of 32 different crops are under conservation in the seed bank. “Seed mother” prepares and sells seed packets for kitchen garden. Her expertise is not just for paddy cultivation, it is also in tomato, hyacinth bean cultivation, participatory seed selection and organic farming. Her four-step method to cultivate paddy resulted in 30% increase in yield. She also learnt how to rear poultry in her backyard and established nursery with support from MITTRA (Maharashtra Institute of Technology Transfer for Rural Areas). In addition, Rhaibai involved in improving women life – is helping women to stand on their own legs and to be independent. This woman self-help movement teaches villages sanitation, clean kitchen, wild food importance and seed conservation method! Seed mother Rahibai’s work is appreciated by scientists and Government, she has several awards in her kitty.

The lesson we learn from women like Rahibai is crops that are indigenous responsible for our good health. The selection, conservation and cultivating of native seed (crops) are central to both global food security as well as sustainable agriculture.