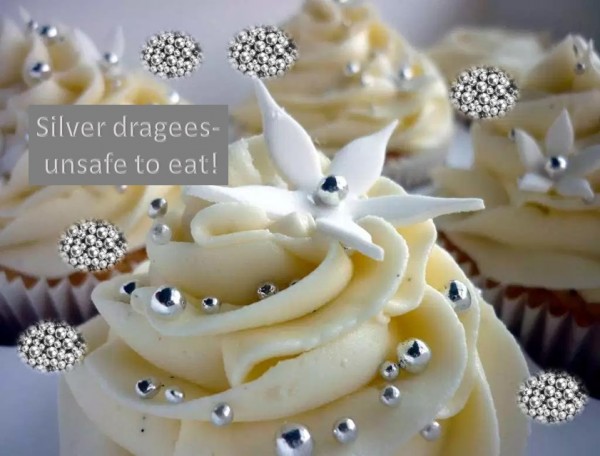 You must be familiar with cakes and cookies that are decorated with silver sparkles. Cookies look attractive and crunchy to eat. Silver beads gives a great look to cake. Because it is with a food item, without thinking much we crunch on them and eat those silver beads.

Do you know that these widely used silver sprinkles are not safe to eat? According to FDA it is unsafe to eat those silver sparkles.

These dragees have a sugar center which gives sweet taste. But the metal coating that is outside that makes dragees inedible. Before consumption beads should be removed.

In the late 1970’s this material gained popularity and led FDA to declare that the silver dragees should be used only for decoration and not to be served as a food item due to its metal coating! Still bakers, amateur and professional alike use these sprinkles especially during holiday seasons.  Currently in 49 states in US, silver dragees are sold and in California it cannot be purchased due to a 2003 lawsuit which declared ingestion of silver dragees is harmful. In many countries silver beads are still consumed.

When small silver balls known as “silver dragees” are sold exclusively for decorating cakes and are used under conditions which preclude their consumption as confectionery, they are not considered to be in the category of a food or confectionery – FDA guidelines states.

While mentioning about silver colored almonds, further FDA policy says “ Silver colored almonds have been offered for cake decoration. In this regard, the *Center for Food Safety and Applied Nutrition* has stated: “Although, the articles (silver colored almonds) may be intended for cake decoration, we do not agree that they are dragees; further, we see no compelling information that the articles are to be used for decorative purposes only and thus would not be eaten. There is no authority under the color additive regulations which permits silver to be used as a color. Neither is there a food additive regulation (or exemption) authorizing silver as a food coating“.

Silver dragees are very popular during holiday seasons and are included in graduation party, birthday party cakes and decorations. Instead of using silver dragees, go for known icing or drops that are safe to consume. If you come across silver coating and dragees, remove them from decoration before consuming the actual food.