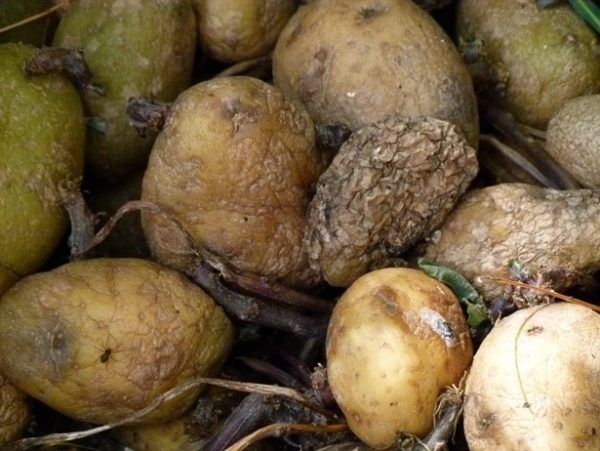 We often look at potato as a food that carries loads of carbohydrates and any preparation from potato is considered as “junk food”.  In our cooking system we think potato is there to dishes more interesting and tastier. Do you know potato has is a valuable crop and even rotten potatoes are valuable?

In a recent press release plant scientists revealed that rotten potato is very valuable as it produces a antibiotic that could help in controlling diseases in crops and can control bugs!

Most of the antibiotic that we extract originate from soil microbes. Solanimycin is also produced by a range of plant pathogenic bacteria. What is interesting is, this particular antibiotic may help to treat both plant pathogenic fungi as well as human infections.

Solanimycin is a potential source of antibiotic that could be used agronomically and clinically.

As per the reports solanimycin acts against a wide range of fungi that known to infect agricultural crops. In lab, solanimycin acted against the fungus that naturally causes infections in humans, Candida albicans. Thus, the results show it is a potential source to control both plant and human infections.

This study was conducted by Rita Monson, Microbiologist at University of Cambridge in association with molecular biologist Miguel Matilla from Spanish Research center, Granada. Today, Actinobacteria phylum, a soil fungus produces most therapeutic antibiotics. Discovery of Solanimycin in rotten potatoes is worth a closer look as it could help those crops where we find growing resistance from fungi for existing treatments.

Miguel_Matilla on Twitter: We describe in @mbiojournal  the discovery of a new #antibiotic active against human and plant #pathogens. Its production is regulated by two #quorum sensing systems and enhanced under conditions that mimic the plant host. @QSPapers @BlastMeetings

The pathogen that harbors in rotten potato is Dickeya solani is the one that produces solanimycin. This bacterium was identified more than 15 years ago. After the discovery, George Salmond, Molecular Microbiologist at University of Cambridge started investigating its antibiotic property. Strains of the bacterium emerging rapidly and are widely distributed – according to Dr. Miguel Matilla. Previously another antibiotic was discovered in D. solani, called oocydin A which is highly active against many plants’ fungal pathogens. This was the hint that made researchers to find the new antibiotic. When they silenced the genes responsible for the production of oocydin A, bacterium continued to show antifungal activity, thus led to track the cluster of genes that are responsible for the proteins that make Solanimycin!

What is interesting is, the bacterium uses this compound sparingly. Means, it produces it in response to cell density and in acidic pH environment. “It’s an antifungal that we believe that will work by killing fungal competitors, and the bacteria benefit so much from this,” said Monson. “But you don’t turn it on unless you’re in a potato.”

What is next for Solanimycin?

Researchers already begun collaborating work with chemists to understand more about solanimycin’s chemical structure and how exactly it works. They will continue testing it on plant and animal pathogens. Immediately, their focus is on trying to use this antibiotic, antifungal for plant protection. They are hoping to coax D. solani to make more compounds that could be used for both plant and human diseases.