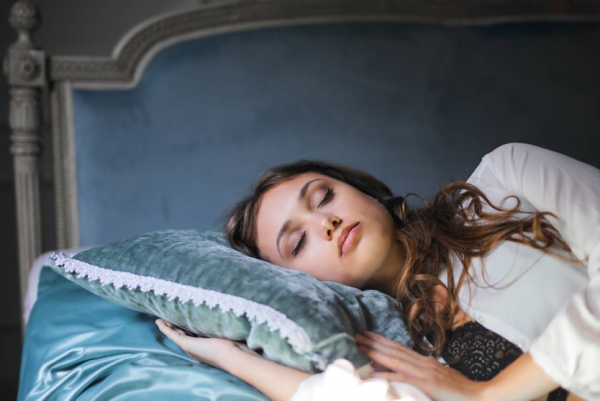 Sleep is important aspect of our lives! After a good night of sleep our body gets full rest and brain becomes active with clarity. Good sleep lays the groundwork for a hectic and productive day ahead.

Everyone knows that women’s brain is complex and how active it is. Women brain thinks and works differently than men. Science also proved that a woman brain can carry various subjects at a time when compared to man. A more recent study of National Sleep Foundation (NSF) in America revealed that women are more likely than men to have difficulty falling and staying asleep and to experience more daytime sleepiness at least a few nights and days a week. According the poll conducted, the average  woman aged between 30-60 sleeps only six hours and forty-one minutes during the workweek.  Too little sleep results in daytime sleepiness, increased accidents, problems concentrating, sickness, weight gain and poor performance in the job!

Did you know that –

Researchers from Duke University discovered that, compared to men, women experience more mental and physical consequences from inadequate rest. The study, which was led by clinical psychologist and sleep expert Michael Breus, estimated men and women’s respective needs for sleep by assessing their ability to deal with insufficient rest. According to Breus, the experiment suggested a sharp difference between genders. “We found that women had more depression, women had more anger, and women had more hostility early in the morning”. What this study says that women need more sleep than men, because their brains work more complexly.

Some experts believe that it ultimately comes down to mental energy expenditure. Women, they say, simply use their brain more than men do. Professor Jim Horne, director of the Sleep Research Centre at Loughborough University and author of Sleep faring: A Journey Through The Science of Sleep, states:

“One of the major functions of sleep is to allow the brain to recover and repair itself. During deep sleep, the cortex — the part of the brain responsible for thought memory, language and so on – disengages from the senses and goes into recovery mode.”

“For women, poor sleep is strongly associated with high levels of psychological distress and greater feelings of hostility, depression and anger. In contrast, these feelings were not associated with the same degree of sleep disruption in men.”

“The more of your brain you use during the day, the more of it that needs to recover and, consequently, the more sleep you need. Women tend to multi-task — they do lots at once and are flexible — and so they use more of their actual brain than men do. Because of that, their sleep need is greater. A man who has a complex job that involves a lot of decision-making and lateral thinking may also need more sleep than the average male — though probably still not as much as a woman.”

“This is because women’s brains are wired differently from men’s and are more complex, so their sleep need will be slightly greater. The average is 20 minutes more, but some women may need slightly more or less than this.”

So, basically, women’s brains are typically more complex and thus need more time to relax and recover during the night.

Author: HealthyLife | Posted on: June 16, 2017
TAGS: AmericaDo you know factsFunctions of sleepGood sleepPregnancy TipsSleep disturbancesYoga and Meditation
« Previous Article Next Article »
« Protect your child from human trafficking What is special about these Popsicle? »