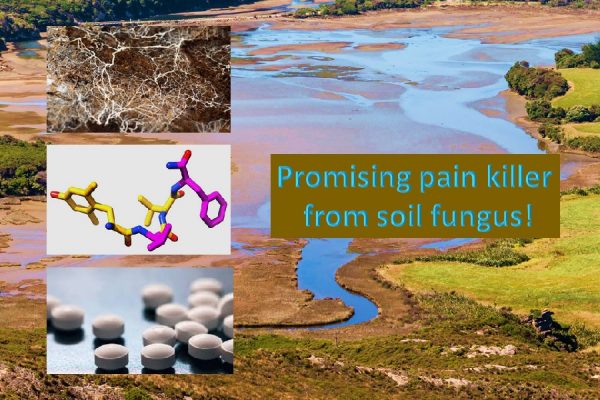 Do you know the soil we step on everyday contains millions of microbes that are beneficial for us? There is mycorrhiza, actinomycetes, nitrogen fixing bacteria etc. all perform their role quietly.  Researchers from University of Sydney and The University of Queensland recently found marine fungus that has molecule like opioids. What is astonishing is the fungus they found is present in mud.

A sample of estuarine mud that was collected 16 years ago yielded this new class of painkiller. The fungus found in the mud contains this pain killer molecule! The molecule is as potent as opioids but without the opioid disadvantages!

Scientists team while investigating sample of mud that also included a sample collected next to a boat ramp in Tasmania, came across the Penicillum fungus that yielded new type of molecule.

Professor Rob Capon from University of Queensland Institute for Molecular Bioscience said, “we came across a fungus that yielded a new type of molecule and named it bilaids which is similar to endomorphins – natural peptides produced by the human body that activate opioid receptors and provide pain relief”

Professor Capon teamed up with his colleague Professor Paul Alewood and Professor Macdonald Christie from University of Sydney to study the details and harness of the molecules that could be a new painkiller.  The chemical modification was observed by Prof Alewood.  The chemical modifications delivered a new molecule based on bilaids named bilorphin is as potent as morphine and is more suitable as a pain drug. Morphine and other opioids cause side effects such as addiction, depression, respiratory issues.

Painkiller with no side effects!!

According to Professor Christie, “No one had ever pulled anything out of nature, anything more ancient than a vertebrate, that seemed to act on opioid receptors – and we found it. If this proves successful and leads to a new medication, it will significantly reduce the risk of death by overdose from opioid medications such as codeine.”

The molecule has been patented now and scientists are creating new painkillers. “Although our discovery of an analgesic from an estuarine mud fungus was serendipitous, it does beg the question – with an almost infinite diversity of fungi in the soils, plants, animals and waters of the planet, perhaps we should be exploring other fungi for analgesics?” Professor Capon said ‘The studies of soil samples and the diverse microbe population present in the soil will benefit the development of drugs for conditions that do not have effective treatments’