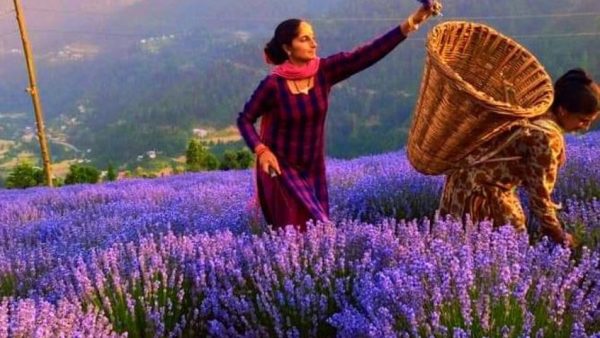 Focus of this mission is to take advantage of the geographical conditions and to increase the homegrown market along with farmers income. In recent years this state is facing drought condition and farmers turned to lavender to beat the drought replacing maize with lavender.

Lavender designated as Doda brand product, Doda is the birthplace of India’s Purple Revolution (Aroma Mission), says Dr Jitendra Singh while chairing the District Development Coordination & Monitoring Committee (DISHA) meetings of districts Doda and Kishtwar respectively. And lavender can be promoted under ‘One District, One Product’ initiative of the Modi Government to attract Agri- StartUps, entrepreneurs, and farmers.

Lavender essential oil is one of the most popular aromatic oil in aroma industry. The demand for this aromatic oil is high in India and worldwide. It is used in potpourri, sachets, floral arrangements, cosmetics, hydrosol, soaps, baby products and room fresheners.

The Aroma mission helps to improve farmers livelihood and doubling their income. CSIR introduced high -value essential oil-bearing lavender crop through Indian Institute of Integrative Medicines (IIIM) in Kishtwar, Rajouri and Doda districts. After introducing the aromatic saplings Lavender cultivation is practiced in many districts of J & K. Farmers are also provided with distillation units and trained to extract the oil. This is helping farmers to grow lavender as well as sell the products. Now many farmers have become entrepreneurs in lavender oil production.  Now the crop is also introduced in Ramban, Pulwama and other neighboring districts. Within few years of time, Aroma mission has become popular and lavender farming became a popular option for Agricultural Startups in this region.

The cultivation of one of the most popular essentials oil crop has generated rural employment, spurred entrepreneurship and farmers showed interest in getting to know aromatic products manufacturing. Their enthusiasm resulted in lowering the import of essential and aromatic oils!

Bharat Bhushan is one of the farmers who made huge profit within two years of growing this essential oil crop. Says Bhushan “ Lavender, a drought resistant crop can be grown on poor soil and likes lots of sun but needs little water. I started lavender farming in 2010 with encouragement of IIIM, Jammu. It is easy to grow and does not need much irrigation and cow dung manure is used. Seeing my success many followed suit and many farmers have become part of self-help groups are engaged in this occupation. I have two nurseries that sell lavender sapling for propagation”.

After seeing the profits nearly 500 farmers who were suffering from drought condition and could not cultivate maize now switched to grow lavender perennial crop. Another advantage of growing lavender is, women who could not leave village for jobs are employed in these fields and distilleries. This profitable crop made many women self-reliant in the area.

In India, with CSIR’s Aroma mission, medicinal and aromatic plants are being cultivated in 6000 hectares of land. It has generated nearly 12 lakh employment and Rs. 60 crores worth of essential oil being produced in past two years.  Farmers are making profits and have improved their lifestyle by cultivating and producing lavender essential oil.

CSIR’s Aroma mission was launched in  2016 is encouraging and helping those farmers whose livelihoods affected by the climate change to grow profitable crops such as lavender, rosemary and lemongrass, and medicinal plants such as ashwagandha. It provides cuttings, helps in setting up distillation units for clusters of 50 farmers, tests oil quality and helps find buyers. Through Aroma mission’s Phase II Purple revolution so far, more than 44,000 people are trained and throughout India CSIR helped to cultivate 6000 hectares land. Government is also planning to introduce other aromatic and medicinal cash crops in J&K.