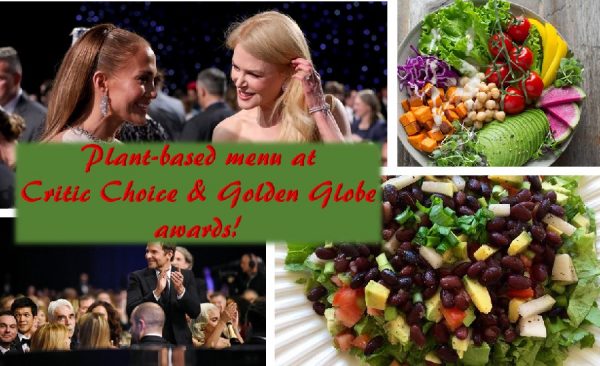 Golden Globe awards is one of the prestigious awards in Hollywood. And of course, there will lavish party with lavish menu the so far included animal-based food. However, this year there was a change and change were welcomed by most entertainers of Hollywood!

To support sustainability efforts, the HFPA (The Hollywood Foreign Press Association) served plant based meal at the Golden Globe awards that was held earlier this year -on January 5th 2020. It was one of the major awards that served all vegan food. A change in the menu was supposed to include fish. Then the change came with a menu that includes appetizer of chilled golden beet soup with locally grown amaranth and chervil. The main dish was king oyster mushrooms cooked, wild-mushroom risotto, roasted baby green and purple brussels sprout, pea tendrils and globe carrots!

According to Beverly Hilton Executive chef Matthew Morgon “the menu was with fish. When they present it to HFPA, they wanted to make the above changes and the whole menu turned to be vegan” And it was 100 percent vegan menu!!

Joaquin Phoenix who won the best actor award for his role in Joker in his speech admired and saluted HFPA for serving the first plant-based meal in the history of a star-studded award ceremony.

After Golden Globe awards, Hollywood’s A list actors and actresses had another surprise this past week end. Yet another plant-based meal was on their menu in Critics Choice Association awards in its 25th ceremony.  As per the announcement this move was designed to “shine a light on sustainability and the ever-growing climate crisis our world is facing”.

For this Critics Choice Award Organization had recruited Baja Fresh and The Counter to provide the attendees/guests with a selection of either the vegetarian tacos and burritos or the plant-based burgers from one these caterers. In addition, there were vegan desserts from Pinkberry and Cold Stone Creamery. CEO of the Critics Choice Award committee Joey Berlin said “When planning this year’s awards show, we wanted to be mindful of the impact that our event has on the environment” Both Baja Fresh and The counter supported CCA’s decision in a big way with diverse menus and tasty food options.

Critic Choice Award is a big, popular show and was hosted by Taye Diggs this year at Santa Monica’s Barker Hangar.

As of HFPA, in all it’s events – they are planning to reuse this year’s new red carpet, to reduce plastic waste and has a partnership with Icelandic Glacial to serve water in glass bottles! The climate change and the impact of climate change on our surroundings has made them think about the future of the environment and to be responsible in their actions by incorporating these positive changes.

Every small step that HFPA, CCA and other well-known associations take, will bring more awareness in people. Consuming plant-based food, reusing plastics or use of natural products will help the suffering climate. The honest concern about global warming and climate change is much needed. The food that we eat, grow, process and disposing – all contribute to climate change and any such positive changes where the ‘A’ list actors are involved and whom people look up to will bring more awareness. And who knows.. influenced by plant-based menu at both popular award shows, we probably might see many celebrities changing to vegan and vegetarian diet!!