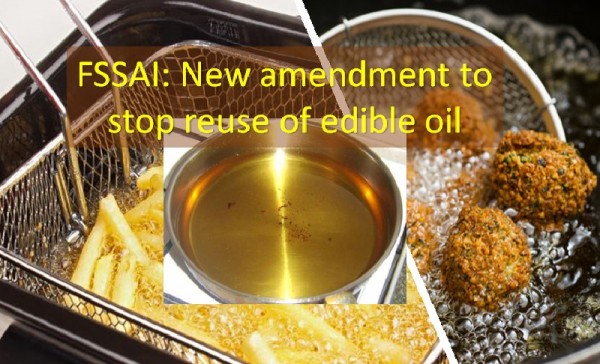 Do you know what happens when we reuse edible oil after one cooking? This can cause health issues – minor to serious health issues. As nutritionists says the free radicals (or polarized compound) that are released will attach to healthy cells and lead to diseases.

Free radicals can be carcinogenic and can cancer. Not only cancer also can cause atherosclerosis which leads to higher cholesterol levels in the body and can lead to blockage of arteries. Some of the other health issues that will arise from reuse of edible oil are: acidity, heart disease, Alzheimer’s and Parkinson’s disease, irritable throat due to inhalation of particles while frying.

To reduce the reuse of edible oil a new amendment has been put forth by Food Safety and Standard Act of India (FSSAI). The new law mandates that the total TPC – polarized compound value in edible oil must be less than 25%. This new amendment of FSSAI will come into effect from July 1st.

FDCA of Gujrat recently has taken a pilot drive to test TPC value of oil across different establishments in Ahmedabad.

While speaking about adverse health impact of TPC –  commissioner HG Koshia, of Food and Drug Control Authority of Gujarat said ‘ as oil is heated to smoking point, the TPC value of oil increases. This is hazardous to one’s health especially in the longer run as it increases trans fat content in the oil. The new amendment will help us to ensure safety of the food prepared outside as well”

According to FSSAI In News: During the regular check and raids conducted by civic authorities, several cases of edible oil reuse and adulterated oil use came to the fore. Many such eateries and manufacturing units were found by the authorities. The adulterated oil usage was merely 7% out of total suspicious samples of oils.  Bhavin Solanki, Medical officer of Health, AMC said that “the new amendment will help better enforcement of quality”

FDCA of Gujarat procured a special device to test the TPC value in oil. Authorities believe that the amendment in the act will further help them to penalize eateries and establishments that reuse edible oil. Authorities will monitor and bring eateries and establishment under scanner. Estimates provided by top sources in Ahmedabad Municipal Corporation’s health department indicate that some 80% of establishments be it a Farsan store or an eatery or a street food vendor, tend to filter out the oil used for frying and reuse it multiple times.

If you are reusing edible oil then understand how many times one can reuse edible oil. It all depends on the type of oil one use. To know more about edible oil visit: