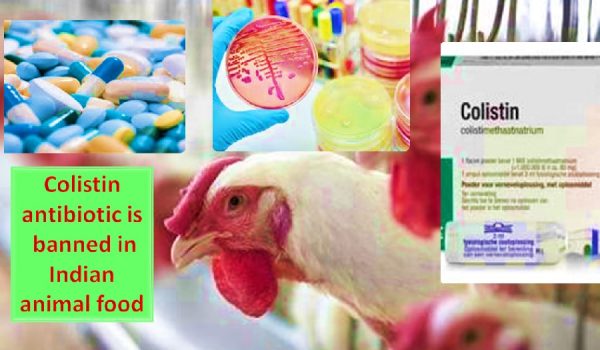 Unless we grow and prepare our own food, we will not know what goes inside the food. When it comes to animal food, whether it is poultry or aqua or animal feed supplements, there are many unknown drugs that goes inside the animal food. After research studies and investigations, names and impact of such drugs and chemicals will come in front of public. Antibiotic colistin is a drug that has been in use to control infections in humans and as a growth promoter in animal husbandry is in news today because Indian government took a bold step to ban the use of colistin in animal food.

In the notification released by the government of India, it is mentioned that it was brought to the notice of Central Government that use of colistin drug and its formulations in food producing animals involve health risk to humans.

This ban is implemented after the studies and investigation was carried out by experts. Investigations showed that consumers developing resistance to antibiotic colistin due to irregular usage among food producing animals and other feed sources. The recommendations were given early part of this year by India’s top drug advisory body, the Drugs Technical advisory board and the National Antimicrobial Resistance Action Plan committee.

Colistin is a crucial last resort antibiotic for multidrug-resistant infections. It helps to treat drug resistant infections for conditions such as pneumonia and STD and gram-negative bacteria.  Use of colistin in live stocks mans, people who consume such food eventually will develop resistance to drug which means such infections can continue to thrive on a person for longer days and can lead to severe health risk.

Use of colistin in animal farms is to fatten up animals or to promote their growth. This is major cause for world’s growing antibiotic resistance crisis. World Health Organization WHO has been stressing on banning such practice to bring back normalcy in human health.

Few years back the discovery of colistin resistant gene and the resistance to colistin drug in the microbes that were never exposed to colistin was a shock to the medical world. According to scientists the resistant gene in bacteria was originated in Chinese livestock and then later found across five different continents!

According to sources, hundred tons of colistin were shipped to India in 2016 that was sold by International and domestic pharmaceutical companies without requiring a prescription! India’s largest poultry company Venky’s which supplies to fast food supplies like McDonald’s, Pizza hut and KFC and to supermarkets and also owns Blackburn Rovers football club in UK was marketing antibiotic colistin as a growth promoter (to farmers)!!

In India this ban from Ministry of Health also means “Manufacture, sale and distribution of the drug colistin and its formulation in food processing animals and other animal husbandry sectors is banned” and, the drug cannot be used as a veterinary medicine. According to Dr. Abdul Ghafar an advisor in the committee wording of the ban is strong and is the best gazette notification one can ever get. It indicates that the Indian government convinced that colistin is a last resort antibiotic, colistin resistance is increasing in humans and colistin is extensively used in animal husbandry as a growth promoting agent. Tim Walsh Professor at Cardiff University who first time discovered the mobile colistin resistant gene in bacteria also welcomed ban on colistin from Indian government. Walsh has been instrumental in working with different governments to slow down spread of colistin resistance. According to Walsh, this ban is a welcome step but monitoring and enforcing the ban was crucial.