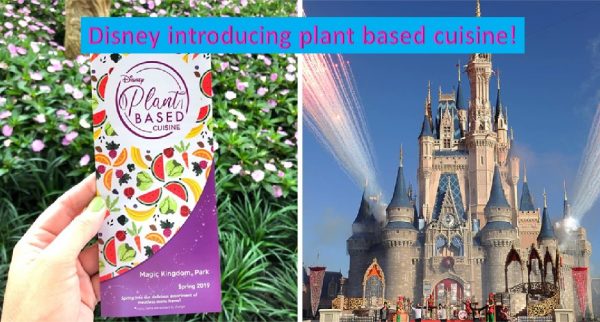 Disney is a favorite place not just for kids even for adults. Visiting Disney theme park is a dream of many. People who visit Disney look forward for all those fun filled shows, games, magical kingdom’s charm, and the FOOD! Until recently, Disney had very few options for plant based foods for vegans and vegetarians inside its theme park. Well…,not anymore!

Good news for vegans and vegetarians is they no need to go out or carry their food to Disney world anymore! At least in Magical Kingdom. Eating plant-based food in Walt Disney World is just got easier in Orlando Florida.  Recently Disney released their Disney Plant Based Cuisine guide. It means at select full service dining locations in the Magical Kingdom which is the main attraction of Disney.

Disney resorts in recent years have been continuously updating their menus to meet an extensive variety of diary needs as well as plant based nutritious foods. To meet the needs, in resorts they have also added vegetarian and vegan options. Vegan Disney World and Happiest Vegan on Earth are two highly recommended resources for plant-based foods. This makes it easy for those who don’t eat animal byproduct or meat. It is a big treat for animal lovers as Disney previously has not been friendly (with menu) and menu approach was not straightforward.

Walt Disney world released the pamphlet that display vegan, vegetarian friendly food sources. The plant-based cuisine guide gives an insight into what is both vegan and vegetarian quick and full services locations available in the theme park.

The pamphlet is available to pick up for free on site and visitors can chose veggie friendly food items when visiting the fun park. Details also include symbol to indicate the items is free from dairy, egg, animal meat and even honey. Disney World’s this big step is already attracting those who depend on plant-based food. Reason is, in most Disney parks, one can see mostly nonvegetarian foods, ice-cream, cake and popcorn along with juices, soda etc. Adding plant based foods in different locations makes it easy for those who love to eat inside the theme park while enjoying their visit.

These locations are available in six sections – one for each area of the park.  Adventureland, Frontierland, Fantasyland, Liberty square, Main street USA and Tomorrowland. Fantasyland has most options with eight sources and 28 different items! Some of the popular plant-based food items in these restaurants to chose are: Perkins Thai noodles, vegetable quiche, Mermaid Doughnut, Mickey pretzels, popcorn, pineapple dole whip, strawberry smoothie etc.

All popular theme parks hopefully will adopt Disney’s positive move. Disney’s move is bringing more people to Disney world as the number of vegans and vegetarians increasing in both Canada, USA and other parts of the world from where Disney gets visitors from. Hopefully Disney’s this change soon enters other theme parks including Animal Kingdom. Who wants to eat meat when you are surrounded by animals?