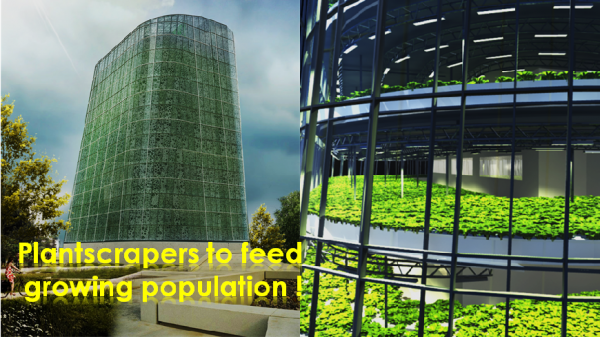 Increase in population in the world making it hard to find fertile farms to grow food and the way we are growing food is not sustainable too.

By the year 2050 world population is expected to grow to 10 billion. To fulfill needs of growing population we need to use more land and transportation facilities across the globe. It also means we will continue harming environment by using harmful practices to fulfill everyone’s needs.

Scientists and researchers including farmers are trying to find a better way to feed the growing population.

Swedish company Plantagon has come up with an answer in the form of “plantscrapers”. These are tall, massive vertical greenhouses meant for growing large-scale organic food farms in cities. It uses less energy and smaller carbon footprint than the way we are growing food at present.

Plantscraper is a futuristic looking glass scraper filled with indoor office space for the workers and farm.  The first prototype is going to be a reality by 2020 and the company is crowdsourcing the funds to construct 16 story building. It is called the world Food Building at Linkoping, Sweden. It serves as an international model for Industrial urban farming of the world.

This prototype and subsequent plantscrapers would use patented technology by Plantagon to produce 500 metric tons of food every year! The farm is climate controlled. Nearly half part of the energy used for food production will be recycled in different form like heating the floor of the office building. It also saves water and will be less carbon dioxide emission.

Plants will be grown using hydroponic culture without soil. Water will have nutrients that are needed for plants to grow. It will be largely automated.

In a press release Plantagon officials said “ our vertical farming technology is a solution to the food crisis caused by our human population growing so rapidly. We are growing, the earth is not and vertical farming will make the difference”.

Plantscraper will also include spiraled food production line, that will automatically moves the plants from bottom to top and back again once they grow. Apart from tall buildings, it also has designed global structure. In addition to growing food, it also will have market from where people, local restaurants and food retailers can buy their fresh produce.

Plantagon is planning to extend its innovation and to build similar structure it is in conversation with other countries – USA, Singapore, Hong Kong and Shanghai.