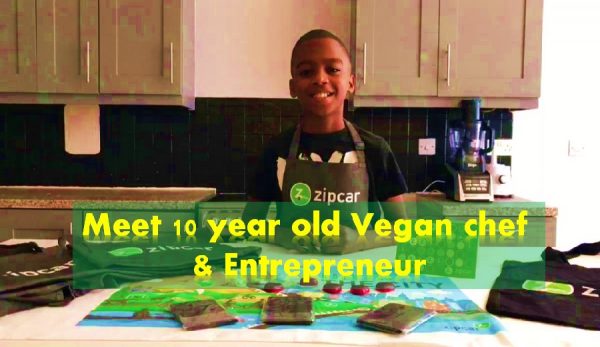 McQueen is the youngest restaurateur in the world and will host his first vegan pop-up restaurant in Boxpark, Croydon in August this year.

McQueen had a passion for cooking when he was just three years old and started learning cooking meals at age of seven. McQueen’s mother who got sick with hemiplegic migraines started teaching both Omari and his brother Laquarn to cook meals to help both parents. Omari took this seriously and went on practicing different cooking meals. He adopted different skills and his interest in understanding and benefits of ingredients that goes in each meal made him youngest chef and entrepreneur of the world today!

McQeen became vegan after coming across a video from PETA, UK. He understood importance of veganism and came out with his YouTube video at the age of eight. His first vegan recipe was “vegan pizza” using the dip created by him. He wanted to make everyone happy with his meals and his motto is to prepare food that is enjoyable to all. After his first YouTube video McQueen found that the vegan pizza was too dry.  Reason for preparation of his own dip for vegan pizza was he was not sure wither Heinz dip was vegan. But the dip prepared by him was a hit with friends and family and inspired him to found Dipalicious.

McQueen started saving for his own bus-converted vegan restaurant as well as ready to eat meals for kids. He wanted to teach other children about importance of vegan food. Now he teaches young children how to cook and conducts ‘kids cooking’ workshops at his home. His selection of dishes includes dips, juice packs, seasoning and snacks. He has been featured in BBC radio and ITV news. He also met with array of celebrities like Kevin Hart and Levi Roots

The Vegan pop- up restaurant will open this August during summer season at Boxpark Croydon. The menu details of the restaurant is not released yet. In his Instagram McQueen loves to share vegan Caribbean food such as BBQ jackfruit with breadfruit curry and fries. According to the resources Dipalicious probably will make vegan dips such as  Caribbean vegan dishes such as Caribbean kick, coco curry and Luvi’in jerk.

The young entrepreneur’s hardwork and accomplishments has been recognized by many organization. He won TruLIttle Hero  by Cause4children Ltd, Compassionate kid award from PETA in 2018 and also won Proud & gifted Award for his work as vegan chef.

World is seeing an increase in vegan and vegetarian numbers. There is a tremendous growth in vegan numbers from the year 2015 and this is all for good reason. The compassion for animals and understanding the benefit of eating plant based food is what making today’s generation to go in search of vegan meal. Let us applaud the accomplishment of Omari McQueen and wish him well in his future endeavors!