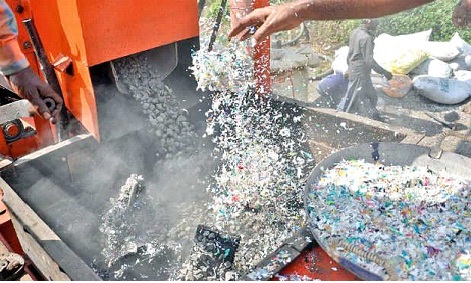 By Sophie McAdam at trueactivist.com

The Indian government has just declared it mandatory to use plastic waste in construction, meaning less of the stuff ending up in landfills and oceans, as well as providing a welcome boost to local authorities’ incomes.

Waste treatment of all kinds has long since caused problems for India, with the country growing too fast for resources to keep up. According to a Guardian report, between 70-80% of the country’s wastewater (including human sewage) ends up in its rivers and lakes. This has become such a huge problem that Sunita Narain, director of the Centre for Science and Environment (CSE) in Delhi told The Guardian in 2012: “We are drowning in our excreta.”

India‘s plastic problem is just as urgent. As The Economic Times of India reported yesterday, ‘India generates 56 tonne of plastic waste annually. As per a study by the Central Pollution Control Board, 60 large cities in India generate over 15,000 tonne of plastic waste every day. Delhi generates close to 7,000 tonne of waste every day, of which over 10 percent is pure plastic but cannot be disposed of even by waste-to-energy plants because of environmental reasons.’
India’s Supreme Court warned earlier this year that the country was sitting on a ‘plastic time bomb.’ Under the new legislation, road developers will now have to use waste plastic along with hot mixes for constructing the usual asphalt roads, which enhances quality and longevity. Other benefits are that adding plastic increases the water resistance of roads, and brings down the cost of development.

“The same technology can also be used for construction of rural roads,” a government official told India’s Economic Times.
Until the new legislation this week, only the city of Bangalore (now called Bengaluru) had roads made from plastic waste. K K Plastic Waste Management Pvt Ltd is a private company run by two brothers, Rasool and Ahmed Khan. They started recycling plastic waste for construction back in 2002, and after laying 3,000km of roads they were keen to share the technology with others. However, Rasool Khan told Indian news site Citizen Matters that until now, there’s been a lack of interest- and getting hold of plastic waste hasn’t always been easy.

“Assuming that [Bengaluru] produces 100 tonnes of plastic waste on an average every day, we have the capacity to utilise the same plastic waste for laying 5,000 to 10,000 km of roads annually,” he said. “But, this is not happening because it is a herculean task for us to collect dry plastic waste from the city.”

Despite concerns over the toxicity of heating plastic waste to be used in roads, The Khan brothers argue that recycling the material over and over again is just as bad, and it simply doesn’t go far enough to effectively deal with India‘s enormous trash problem. “The plastic menace can be tackled only if a scientific and permanent solution can be found for its disposal. Plastic waste to roads and other construction materials is the feasible and scientific solution,” their website states.

With India‘s new law forcing developers to use waste plastic, and the added incentive for local authorities to make money from selling it, the country hopes to have averted the ticking time bomb of plastic pollution- for now, at least.

Author: HealthyLife | Posted on: August 15, 2016
TAGS: indiaIndian governmentPlastic WasteRoad Construction
« Previous Article Next Article »
« How safe is drinking water in Rio? Texting and Driving – is it worth? »