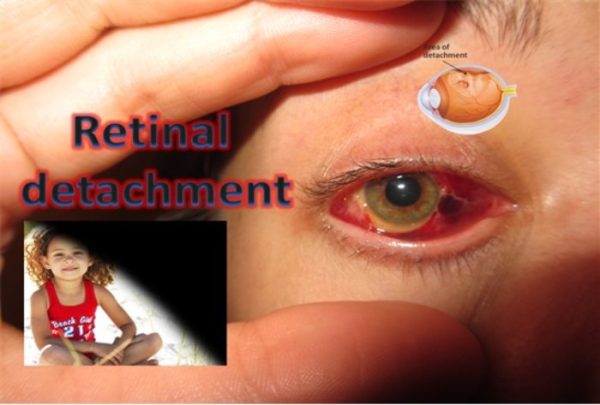 The retina is the light-sensitive layer of tissue that lines the inside of the eye and sends visual messages through the optic nerve to the brain. When the retina detaches, it is lifted or pulled from its normal position. If not promptly treated, retinal detachment can cause permanent vision loss.  Retina detachments are often painless, and symptoms that may be noticed include perception of flashing lights, floaters, or a curtain drawn over your visual field.

Rhegmatogenous – The most common type where a tear or break in the retina allows fluid to get under the retina and separate it from the retinal pigment epithelium (RPE), the pigmented cell layer that nourishes the retina.

Tractiona – This less common where a scar tissue on the retina’s surface contracts and causes the retina to separate from the RPE.

Exudative – This is caused by retinal diseases such as inflammatory disorders and injury/trauma to the eye. Fluid leaks into the area underneath the retina, but there are no tears or breaks in the retina.

Treatment: Treatment for a detached retina involves surgery, mostly using lasers, that can improve vision affected by the retinal detachment. Small holes and tears are treated with laser surgery or a freeze treatment called cryopexy.