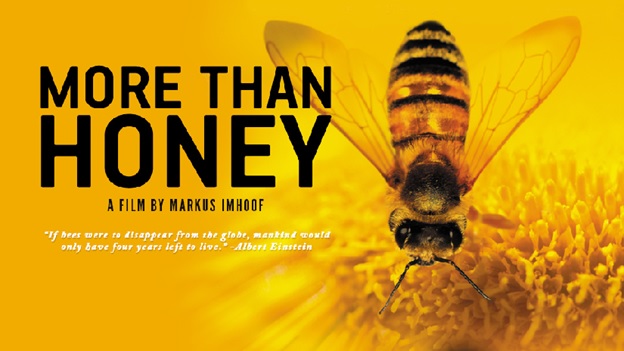 A documentary (2012) by Markus Imhoof who is a decedent of beekeeper family focuses on importance of honey bee and the fear of their extinction that can cause change in our food system.

Many bee species are under the verge of extinction. More than honey gets into the mystery of dwindling bee population worldwide (America, Australia, Switzerland, China and other countries) and how the food supply will be affected by bee’s disappearance.

The colony collapse disorder and agribusiness of honey production – the two phenomenon is well connected by Markus in the documentary.

Movie is also a tutorial of biology and social behavior of bees and cinematography is wonderful (by Jorg Jeshel). Swiss Alps to interior of beautiful beehives brings bees close to your heart and is  one must see document.

The film also covers aspects like pesticide effect that sprayed on almond flowers in California and its impact on bee colonies. Randolf Menzel, a German neurobiologist views bee colony as a single large animal!

Per Menzel, the worker bees make up the body, and the drone and the queen are male and female sexual organs. As per this definition a colony of 50,000 bees represents a single organism with nearly 500 billion nerve cells (as compared with the human brain’s 100 billion).

A movie worth watch “more than honey”.