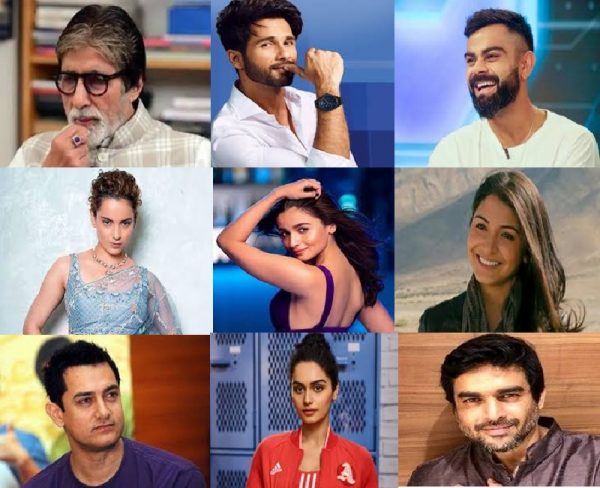 Many celebrities have adopted Vegan or Vegetarian diet for personal, health, or environmental reasons, and are speaking up for this lifestyle.Look at some of veganism & vegetarianism’s most prominent supporters in next few slides. 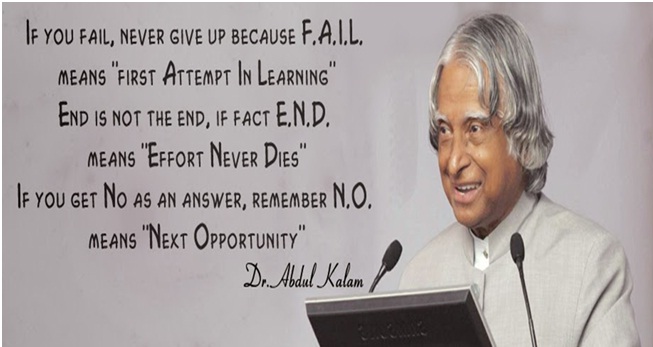 Dr. A.P.J.Abdul Kalam – The most loved President of India. The Missile Man, recipient of the Bharata Ratna (India’s highest civilian honor). Known for his motivating speeches, quotes and books. He is really loved by young children and has been an inspiration to millions of Indian youth…&…He is a Vegetarian! R. Aravamudan, former director ISRO’s Satellite Centre , Bengaluru who was closely associated with Prof Kalam, in an interview   quoted that “We (Prof. Kalama and others)  lived in Indira Bhavan Lodge in Thiruvananthapuram. People there called him Kalam Iyer because he moved around with vegetarians and had similar eating habit”!

The McCartney’s’ Meat Free Monday campaign has attracted support from pressure groups such Greenpeace, Friends of the Earth and WWF (formerly the World Wildlife Fund) and from a clutch of celebrities, including Kevin Spacey, Gwyneth Paltrow, Ricky Gervais, Lily Cole, Pamela Anderson, Victoria Pendleton and Sophie Dahl. In an interview (Huffington post) Sir Paul McCartney sais “I’ve been a vegetarian for a long time now and over the years I’ve seen how the attitudes have changed around the world, so I’m not surprised when I see new research that shows more and more people are increasingly adopting ‘meat free eating’. Even 20 years ago, it could sometimes be difficult to find vegetarian options in good restaurants. Now it is great to see more and more choice with some brilliant creative dishes in restaurants, cafés and supermarkets. There is definitely now an overall greater acceptance of being vegetarian”.

John Harvey Kellogg, M.D. (February 26, 1852 – December 14, 1943) was an American medical doctor in Battle Creek, Michigan, who ran a sanitarium using holistic methods, with a particular focus on nutrition, enemas and exercise. Kellogg was an advocate of vegetarianism and is best known for the invention of the breakfast cereal known as corn flakes with his brother, Will Keith Kellogg. 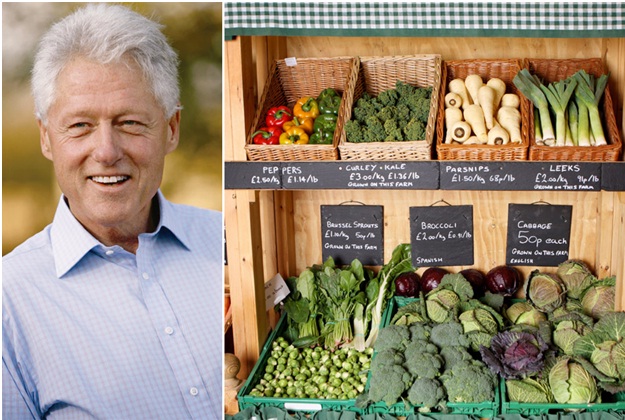 After undergoing quadruple bypass surgery in 2004 and a later stent surgery, the 42nd president adopted a vegan diet in 2010. He lost 20 pounds, and has become an advocate for vegan and meatless diets.  In an interview  Clinton mentioned that “I like the vegetables, the fruits, the beans, the stuff I eat now. All my blood tests are good, and my vital signs are good, and I feel good, and I also have, believe it or not, more energy.” 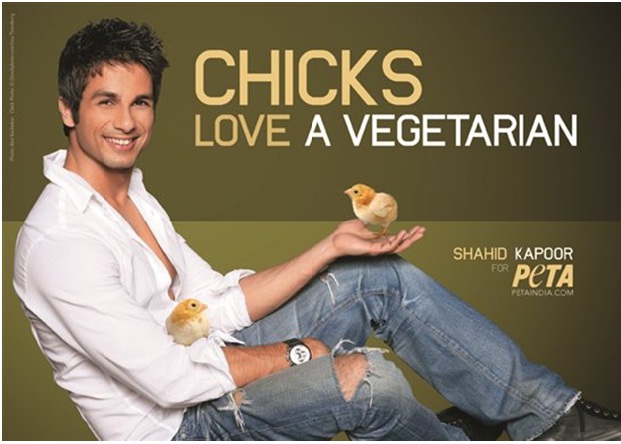 Bollywood actor Shahid Kapoor was crowned as Asia’s Sexiest Vegetarian in a celebrity contest held by PETA Asia-Pacific in 2011. This guy finally married to Mira Rajput who is also a vegetarian.  They both look great together! Holding two chicks in the palms of his hands, Shahid flashes a smile that helped him win PETA India’s Sexiest Vegetarian of 2009 award.   PETA in 2011 had launched a campaign with Shahid. In the ad Shahid, holds two chicks.  “I love chicks… pigs, cows, fish, and all the other animals too, that’s why I turned vegetarian.” “I am very happy being a vegetarian and I believe that it is the best way to be. The day I started believing in the fact that I would want not to kill animals for my taste buds that is the day everything changed for me.”   Did you know Shahid put his dog also on vegetarian diet?

The World’s greatest geniuses are vegetarians! 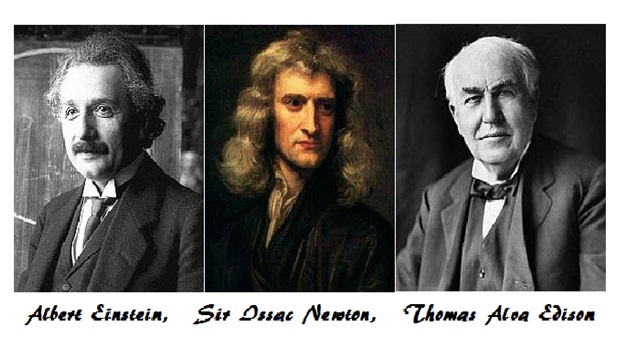 Vegetarianism has a] powerful influence upon the mind and its action, as well as upon the health and vigor of the body. Until we stop harming all other living beings, we are still savages.”: Thomas Alva Edison

“Nothing will benefit human health and increase chances for survival of life on Earth as much as the evolution to a vegetarian diet.” “Our task must be to [widen] our circle of compassion to embrace all living creatures and the whole of nature in its beauty”: Albert Einstein. In his diary on the day, he turned to be a vegetarian Einstein wrote, “So I am living without fats, without meat, without fish, but I am feeling quite well this way. It always seems to me that man was not born to be a carnivore.” 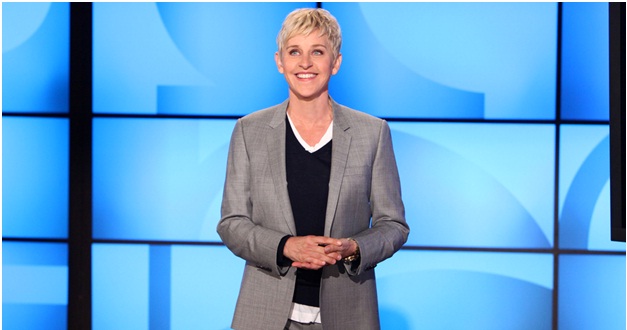 Comedian and talk-show host Ellen DeGeneres switched to a vegan diet in 2008 after reading several books on animal rights and diets. “I do it because I love animals, and I saw the reality and I just couldn’t ignore it anymore.” Degeneres’ wife, Portia de Rossi, shares the same diet, and their 2008 wedding featured a vegan menu. 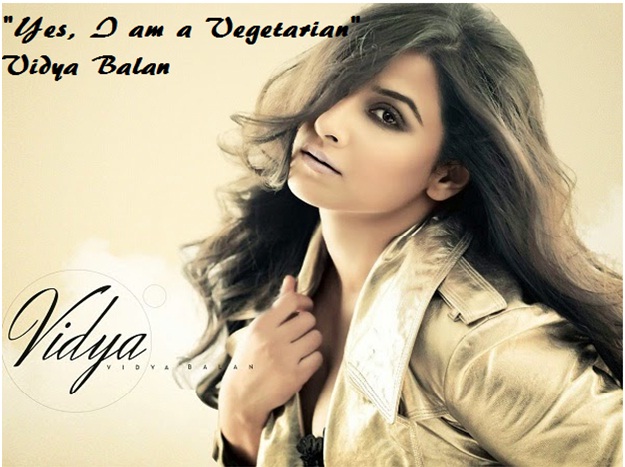 Vidya Balan, National award winning Indian actress was also voted as the hottest vegetarian by an online poll conducted by PETA in 2010. As per Vidya ““The ‘hottest vegetarian’ recognition is an honor, but if you ask me, everyone who goes vegetarian is ‘hot’, since they each make the world a better place every day. This prolific actress says, “Adopting a vegetarian diet may seem like a small choice, but it has an enormous impact on the world around us.” 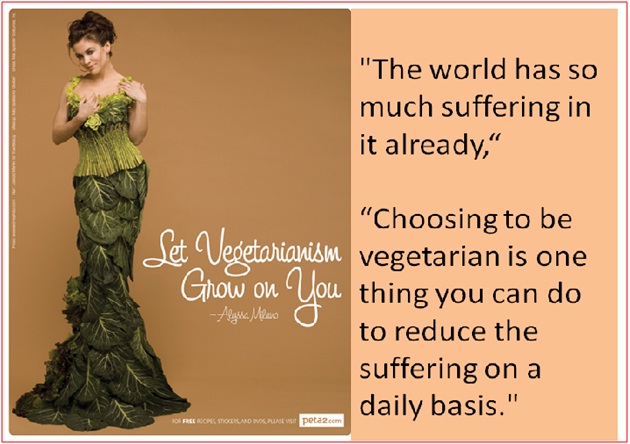 Alyssa Milano: The actress was speaking with a friend from New York shortly after 9/11. Alyssa recounted how “he couldn’t stand the smell of burnt flesh. It immediately reminded me of a barbecue.” Those sickening words were enough to turn the actress into an herbivore.

Alyssa Milano maintained her vegetarian diet during her pregnancy with her son, Milo Thomas. Some vegetarians begin craving meat during pregnancy, but according to Alyssa, her pregnancy cravings did not stray too far from broccoli and pizza. She is not a vegan, so she still eats dairy products like cheese. 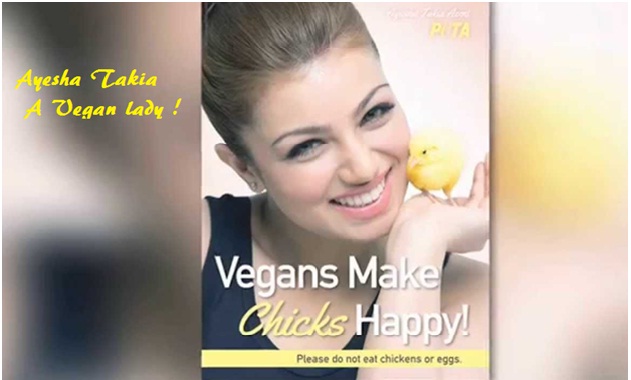 Ayesha Takia: This Indian Bollywood actress  supports PETA cause.  It is not easy being a vegetarian when your husband is a restaurateur. Ayesha turned into a vegetarian five years before she got married. She loves to cook something fast. Now this “Wanted” woman is a vegan and supports animals whole-heartedly! 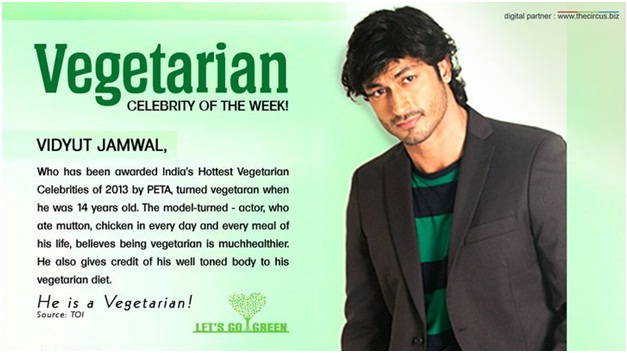 Actor Vidyut Jamwal, Bollywood’s young actor and a martial art expert, became a vegetarian more than a decade ago and he enjoys the benefits of healthy eating habits. He says he is “Now I am more agile and faster. After I switched to being a vegetarian, everything in my life changed. Every good thing is happening. I really mean it because I saw transformations in my body, my mind. I could feel the connectivity between my brain and my body. That is the only reason that was very selfish. After that, I started evolving with my physical ability. I realized that I am more agile, faster.”