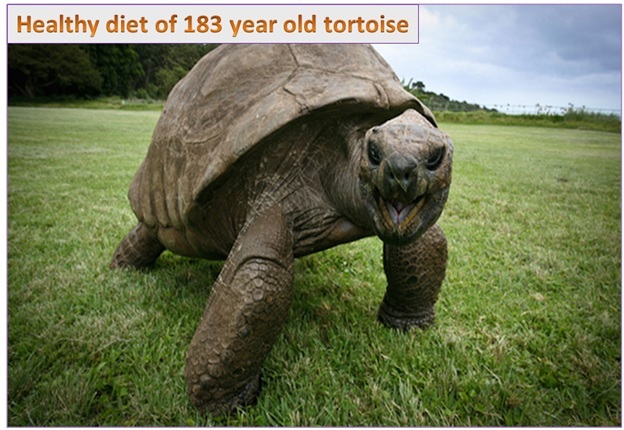 If it works for this tortoise, imagine what a healthy diet could do for the average individual chewing down on doughnuts and Doritos ?

Until recently, it looked like the 183-year-old tortoise was on his way out, having lost his senses which many attributed to his old age.

As it turns out, Jonathan was just eating all the wrong foods. Instead of munching on highly nutritious fruits and vegetables, the elder turtles was consuming twigs, leaves, and even dirt!

His veterinarian, located the British outpost of St. Helena Island, said his health had been in decline because of his failing eyesight and deadened sense of smell.

With a prescription for a healthier diet, however, Jonathan has rebounded and is now enjoying life more fully!

As you can see in the video, Jonathan now enjoys a diet of apples, guava, bananas, cucumber, and carrots.

The highly nutritious fruits and veg have helped the tortoise gain weight and recover his senses. He’s now returned to his daily routine with other tortoises around the Plantation House grounds, where he’s lived since his arrival on the tropical island in the South Atlantic Ocean in 1882.