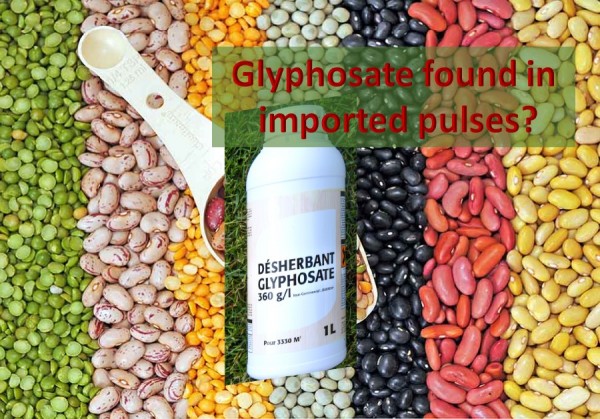 Glyphosate contamination in pulses ?! Yes, says reports!! Recently glyphosate herbicide traces were found in pulses imported to India. The Food Safety and Standards Authority of India (FSSAI) has asked imports division to check consignment of pulses for herbicide presence. In order to test the contamination FSSAI  has directed officers to instruct regional laboratories to test glyphosate presence while testing for other contamination parameters. The results have to be shared with FSSAI every 15 days says the order dated October 12th!

According to FSSAI, there is a possibility of higher level of glyphosate residues present in pulses and cause adverse health conditions in consumers.

Looks like a bit of glyphosate is in everyone’s body!

What is glyphosate? Glyphosate is a chemical that kills weeds by blocking an enzyme that takes part in synthesis of amino acids. Glyphosate is manufactured by Monsanto, a US based Company and is a popular selling herbicide element also present in Roundup. It was considered to be safe to use till 2015. Later World Health Organization’s IARC classified glyphosate as possible human carcinogen. There are many reports suggesting glyphosate is responsible for cancer conditions in humans. Recently in California, a gardener who is suffering from cancer won 289.2 million in law suit filed against Monsanto!  Many countries have banned use of roundup.  Traces of glyphosate reported in ground water too.

When ingested in copious quantities glyphosate is considered to be highly toxic for human health. It can affect overall health by harming immune system. It might even disrupt absorption of minerals and vitamin nutrients.

Even though India is the largest producers of pulses, to meet the demand it imports pulses from other countries around the world. In the year 2017, India purchased pulses worth of USD 2696 million!. Countries from where India imports pulses are Australia, Canada, Maymnar, Russia and Ukraine.

Maximum residue limits (MRLs) for glyphosate in pulses not yet specified in Food Safety and Standard Regulation, 2011. For now, labs are advised to follow the MRL for glyphosate as specified in Codex Alimentarius, (a joint committee set by the WHO and Food and Agriculture Organization -FAO) standards with regards to import clearance. Codex can upgrade the MRL of glyphosate of pulses from time to time!

The MRL for glyphosate specified for few commodities are:

“This is a small step in the right direction”- Says Kavitha Kuruganti of Alliance for Sustainable and Holistic Agriculture. Testing of Indian samples is needed given the amount of illegal use of glyphosate in the country.

In India, glyphosate used as weed killer. Despite its known ill effects farmers are not ready to give up on glyphosate. In fact, the use of glyphosate in India is restricted to tea plantations. It has been reported that farmers are handling it liberally without proper directions. Another reason to use roundup is, wide spread labor problem in Agriculture and farming. Manual weeding is very expensive, and costs go up almost three times.  According to Directorate of Plant Protection, Quarantine and Storage in India this herbicide sale has gone up! Of the dozen formulations available in India, the most popular one is Roundup the sale of which increased by 9%  in 2016-17 as per Monsanto’s annual report.

As consumers we should be aware of the quality of the food and must know where it is coming from. Take maximum precautions to wash pulses, rice and other types of grains before using similar to fruits and vegetables. Washing might take some of the residues that is present on the surface. If you are concerned about health and sources of the food, try going organic. The more we buy organic, demand for organic increases and costs will come down!

Author: Sumana Rao | Posted on: November 1, 2018
TAGS: glyphosate herbicideglyphosate in foodglyphosate in pulsesRoundup cancer trialroundup contamination
« Previous Article Next Article »
« Say no to glitter and be guilt free 2019 Year of the Vegan »