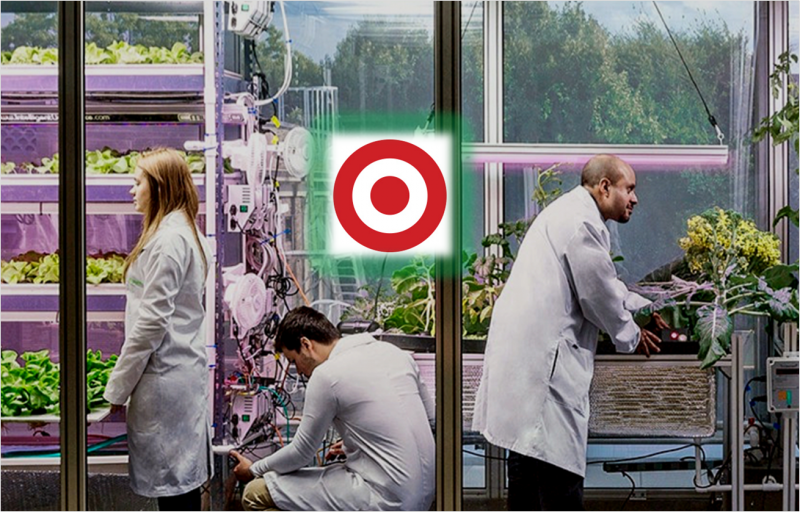 Target would be one of the first retail stores to grow their produce on-site!

Indoor farming is quickly becoming a growing trend because of consumers’ mistrust in GMOs, the yearning to buy as local as possible, and a decline in usable land. There are a variety of indoor farming options available, including incubators that grow plants for households and vertical hydroponic systems that can churn out huge amounts of produce in warehouses.

The latter is likely what would be used at Target, who has announced that they will be testing out a vertical farming system starting in Spring 2017.  The trials will be done at different locations across the country that have not yet been announced, but the store plans on starting out with leafy greens and possibly building their way up to potatoes, beets, and zucchini.

Target collaborated with IDEO and the MIT Media Lab and created Food + Future coLab, a group that is “pushing the edges of technology, business, and design to create new, impactful ventures” that change the way we know and create food. They have been researching in-store micro-farming for over a year and their findings will finally be put to the test next year. Greg Shewmaker, one of the entrepreneurs at the coLab, said,

“Because it’s MIT, they have access to some of these seed banks around the world, so we’re playing with ancient varietals of different things, like tomatoes that haven’t been grown in over a century, different kinds of peppers, things like that, just to see if it’s possible.”

The benefits of indoor farming are immense, but among the most common reasons people turn to it are to become more well-acquainted with their fresh food by knowing its source and to avoid GMOs and pesticides. With indoor farms, pesticides are often not used at all because pests are not present and the crops can be grown organically without GMOs. Buying local produce is also better because it’s fresher when purchased and significantly reduces cost of travel from the site where it was grown. The yield is also much higher than crops grown outdoors and the plants are not vulnerable to changes in weather, allowing the crops to grow year-round.

While Target could really benefit from transitioning to this type of growing, so could consumers. Plants that were grown indoor tend to be healthier for people, and that’s truly what people have been leaning towards as they become disillusioned with Big Ag companies.