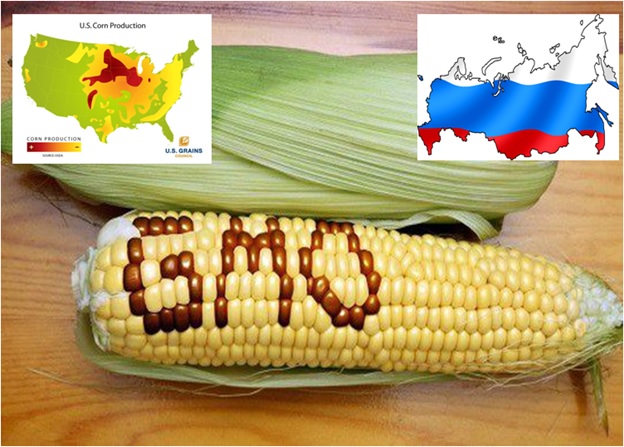 Russia may have a questionable reputation when it comes to their leadership and war tactics, but as far as food safety goes, they’ve made a huge step towards accepting more natural and safer food for their citizens.

On February 15th, the country began the ban on all U.S. corn and soybean imports because of genetically modified crop and microbial contamination. Russia’s stance against GMOs has been building in recent years, and this ban is a huge blow to both organic and GMO farmers.

Though Russia has lately been importing a smaller amount of corn and soybean from the U.S., for example, they only imported 4,742 metric tons of corn between 2013-2014, the impact could be immense. Their decision could motivate other countries with the same views on GMOs to place the same bans on U.S. products and further impact farmers.

According to the Assistance Director of Rosselkhoznadzor, Alexey Alekseenko, U.S. corn often is infected with dry rot of maize and the GMOs can contaminate other crops. Alekseenko stated that, “they (the US) have to establish a system to ensure safety of products imported to Russia.”

Alekseenko and Russia are certainly not the first to attack the potential dangers of GMOs, not only for health reasons but for the sake of organic farmers. Since products that were produced with the aid of genetically modified organisms do not have to be labeled, it is impossible to determine what is free from GMOs and safe to eat unless you exclusively purchase organic produce. However, there is a chance that organic crops have been contaminated by nearby GMO farms and that the integrity of their product has been compromised. The pollen from GMO crops can travel long distances to infect seeds for crops intended to be produced organically. According to Responsible Technology, the cross-pollination from GMO crops will outlast the effects of global warming and nuclear waste.

The health risks, based on studies performed on animals, have shown that the consumption of GMO products resulted in organ damage, immune system disorders, accelerated aging, and infertility. The genetic component of the organisms has been shown to even enter into our own DNA and insecticides have been shown to remain in our blood.

With the risks to health and farmers alike, it’s no wonder Russia has decided to ban the products the U.S. exports without labeling the GMO products and properly researching and checking for the safety of using this method to grow crops. Though it may be harmful for all farmers, perhaps it will encourage the U.S. to rethink their widespread production of GMO crops to prevent more countries from banning their exports.