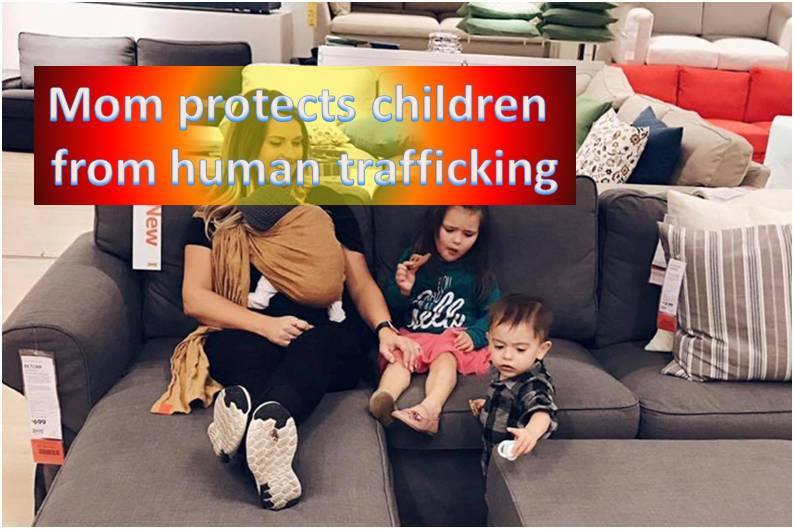 Watch for these signs when you are with kids in public places and protect your child from human trafficking – Explains a mom with her experience.

There are all kinds of horror stories circulating online that detail both successful and failed attempts by human traffickers to kidnap people of all ages. One similarity between all of these stories is our reaction to them: we think that it’s really horrible what happened to those people, but that would never happen to us. Even as we adopt precautions to prevent it from happening to us, we often still think that these scenarios are rare and we will never encounter them.

That’s exactly what Diandra Toyos, a mother of three young children from Southern California, thought up until the moment she realized she was being targeted. Or, more accurately, her kids were.

Toyos was shopping at IKEA with her three children, which are between 7 weeks and 4 years old, and her own mom when she started to get a feeling that something was wrong. What started out as innocent, fun couch shopping turned into a nerve-wracking experience for her as she evaded what appeared to be human traffickers.

Accompanying her Facebook post about her experience at IKEA was a photo taken shortly before she noticed a man was watching her and her children. Read her story below to find out what unfolded:

“I recently read a post written by a mother I didn’t know, that went viral. She described an event that happened to her while she was at Target. She and her children were targeted by human traffickers. She talked about how when she reported the incident after the fact, she was told that this was a very common way they worked.

I read things like that, and I always think “wow, that’s so scary… I need to be careful”. But I also always think ‘that could never happen to me.’ But you guys, it did.

A few days ago, my mom and I took the kids (I have 3 kids. A daughter who is 4, and two sons, 1.5 years and 7 weeks) to IKEA. We enjoy going and it’s always nice to get the kids out of the house! We went specifically to look at couches. We were in the couch section and the kids were enjoying climbing on each couch and trying them out. My daughter was trying to convince us which couch we should get. My older son was happily walking from couch to couch, flopping himself on each one. My baby boy was snuggled into the sling, sound asleep. After a few minutes, I noticed a well dressed, middle aged man circling the area, getting closer to me and the kids. At one point he came right up to me and the boys, and instinctively I put myself between he and my mobile son.

I had a bad feeling.

He continued to circle the area, staring at the kids. He occasionally picked something up, pretending to look at it but looking right over at us instead. My mom noticed as well and mentioned that we needed to keep an eye on him.

We moved on… and so did he. Closely.

My son wandered into one of the little display rooms across from the couches and I followed him closely with my baby strapped to me. My mom said she watched as the older man dropped what he was doing and quickly and closely followed us into the area. At the same time, she noticed another man dressed more casually and in his 20s. He was not looking at us, but was walking the same circling pattern around us as the first man.

My mom and I decided to sit down and wait for them to move on. We had a gut feeling something was going on, but we hoped we were wrong and they would move on. So we sat in one of the little display rooms. For close to 30 minutes. And they sat too. They sat down on one of the couches on the display floor that faced us. That was when we knew our gut feeling was right and something was off. They sat the whole time we sat, and stood up right as we got up.

We continued on and my mom turned around and realized the two men had moved and were sitting only one couch away from each other, still facing our direction. The older man was still watching us. She made eye contact… very clearly letting them know that we saw them. And we moved on.

We managed to lose them at that point. (We talked with an employee, circled back and used the bathroom and went out into a different section). But still kept the kids right with us the whole time. I kept the baby in the sling which kept my hands free and my eyes too. I didn’t have to keep an eye on the stroller AND two kids… I just had to watch my older ones. When we got through the maze of IKEA, we reported what happened to security.

After talking through the experience, there are some things I want to point out:

1. These men weren’t shopping. While they walked around the store, they weren’t looking at things… not really. The older man would occasionally pick something up and act like he was looking at it, but he’d look right over the top of it at my kids. Then he’d drop it and move on as soon as we did.

2. They weren’t waiting for anyone. Often you see men in a place like IKEA waiting for their wives, but these guys appeared to be alone. They didn’t even talk to each other. They didn’t talk to anyone. They didn’t smile casually at people (in fact, early on, I looked at the older guy when he got close to us and smiled… which is something I do regularly when I’m out.. I’m always making eye contact with people. He instantly looked away. That was odd to me).

3. They were dressed nicely but very differently. I would never have put these two together. And they didn’t appear to be together.

4. The area they were hanging around had an exit right by it. IKEA is a massive confusing maze of a store. But they could have run out that exit with my child and handed them off to someone waiting outside and been gone before I could find them.

Something was off. We knew it in our gut. I am almost sure that we were the targets of human trafficking. This is happening all over. Including the United States. It’s in our backyards. I’m reading more and more about these experiences and it’s terrifying. If not that, something else shady was obviously going on. Either way, as parents, we NEED to be aware.

Please, PLEASE be aware when you’re out with your children. It’s not the time to be texting or Facebooking or chatting on the phone. When you’re in a public place with your kids, please be aware and present so that you don’t become a victim.

Had I not been paying attention that day… or had I let my kids roam and play while I checked my phone… I may have lost one. The thought just makes me completely ill. (Especially because I’ve been guilty of this!)

Also, in hindsight, I would have taken a picture of the guys. Probably right in their faces so they saw me do it. Trust your gut. It’s there for a reason.”