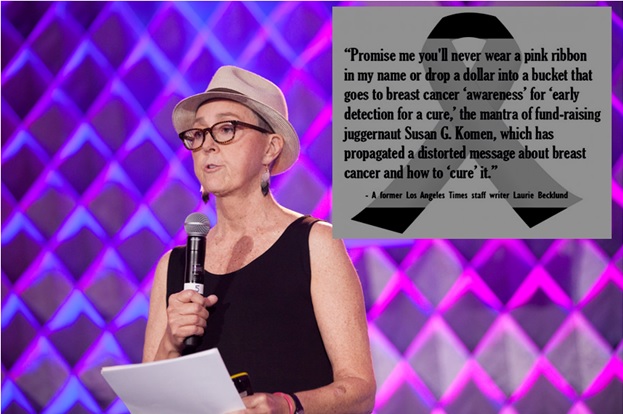 Laurie Becklund, former writer for the Los Angeles Times, recently died from the only deadly form of breast cancer, metastatic breast cancer (MBC), and published an opinion piece in the L.A. Times titled “As I lay dying.” The piece told the story of her battle with breast cancer and called into question many of the processes of the breast cancer industry and even attacked well-known breast cancer mogul Susan G. Komen.

One important point she had was that early detection does not cure cancer. Becklund stated that although she had 20 mammograms before she was first diagnosed in 1996, none of these caught her breast cancer early. It wasn’t until she did a self-exam that she found a lump and brought herself to the doctor to confirm that she had breast cancer. She goes on to say that, “we now have significant studies showing that routine mammogram screening, which may result in misdiagnoses, unnecessary treatment and radiation exposure, can harm more people than it helps.”

To be considered early detection, the cancer must be caught before the symptoms start to take effect, which can become an issue because not every precancerous condition that is caught will become cancer, but each case is treated the same. The routine mammogram screenings result in 25% overdiagnosis, according to an article published in the Oxford Journals, which may cause harm to patients from an “overuse of anticancer therapies.” A different article published in the New England Journal of Medicine estimated that 31% of women in 2008, that’s about 70,000 women, were overdiagnosed with breast cancer.

When Becklund was first diagnosed, she was treated with a lumpectomy and radiation even though she had the most “curable” type of breast cancer. People who go five years without the return of cancer cells are told that they will likely not have cancer and that they are survivors, so when Becklund reached her five-year mark, she thought she was free of the disease.

However, in 2009 Becklund received the worst news; her cancer had not only returned, but it became metastatic and had spread to her bones, liver, lungs, and brain. Metastatic breast cancer is the only form of breast cancer that can kill people, and MBC is defined as cancer that originates in the breast area but then travels to other organs and begins attacking them. MBC is not curable, just treatable, and makes up an estimated 30% of all breast cancer cases.

Despite the overwhelming need for accountability in MBC-diagnosed patients because of how many lives it takes, the Surveillance, Epidemiology and End Results (SEER) Program that provides cancer statistics does not recognize MBC in its statistics. Since these patients are not required to state that they have MBC, not even on their death certificate, Becklund writes that “we are literally uncounted.” Becklund calls out the medical establishment for failing MBC patients by not recognizing them because although it’s estimated that 40,000 patients die annually and 250,000 await their death, there is no way of knowing if this number is much higher.

Becklund is wary of organizations that attempt to raise awareness for breast cancer with false statements, especially Susan G. Komen, since their mission is to raise awareness for “early detection for a cure.” Since Becklund denies that early detection is even helpful, and 79% of Komen’s money goes to education programs, this has contributed little to the survival rate of metastatic breast cancer patients. In the last 30 years, the $2.6 billion that has been donated by Susan G. Komen has had little impact where it matters.

These are harsh words from Laurie Becklund, but perhaps they needed to be heard and she needed to publish them before she lost her battle. Although many MBC patients die less than 2 years after the cancer spreads to just one organ, Becklund’s body fought for 7 years even though it had spread to all four of the possible organs. Her fighting body paired with her fighting words against the breast cancer industry remind us to always questions the establishments to find better solutions to huge issues such as cancer that are taking the lives of loved ones.